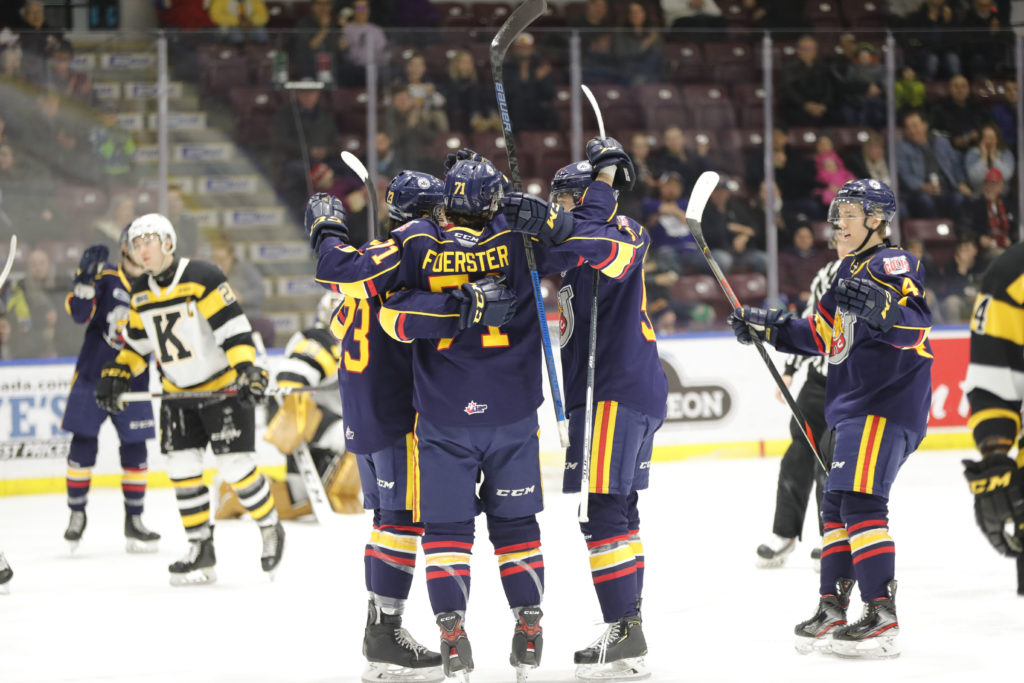 A pair of Colts goals just 20 seconds apart early in the third period, lead Barrie to a 5-3 victory over the Kingston Frontenacs Saturday night.

Another victory gives Barrie wins in 5 of their last 6 games as they continue to climb back up the divisional standings, now tied for second with the Mississauga Steelheads.

Ethan Cardwell and Brandt Clarke lead the way with a goal and an assist each. Evan Vierling scored the game winner in the third to extend his point streak to 9 games while Tyson Foerster extended his as well with two assists.

Coming off a dominating performance the previous night in Niagara, the boys went right back to work versus Kingston in a strong finish to the three in three weekend. Facing off against Shane Wright, who recently just turned 16 a month ago and granted exceptional status last April proved why he belongs in the OHL as he registered two goals and an assist on the night.

Wright, who is eligible for the 2022 NHL draft, dominated minor hockey before making the jump to major junior. A Former teammate of Colts rookie Brandt Clarke with the Don Mills Flyers.

The Colts got out to great start looking to continue the momentum they’ve carried recently.

Just under two minutes in the Colts would jump on their first powerplay of the game and take the early lead. Foerster let the one timer fly from the left side and Luke Bignell skating across the net tipped home his 13th of the year.

Five minutes later Kingston would respond and it would be Wright deking his way around a Colts defender before wristing a shot past the blocker of Silovs to even the game up.

The Colts would go to work once more with the man advantage. Victor Hadfield made a slick feed cross-ice at the hash marks for ECardwell to rip it along the ice under Christian Propp. Anthony Tabak also assisted on Cardwell’s 19th of the season.

With just two minutes remaining in the opening period Wright would send a quick snapshot over the glove of Silovs off a back hand pass from Martin Chromiak and the two teams would skate into the intermission tied a two.

The netminders at each end kept everyone off the scoreboard in the second period as neither team could pull ahead after forty minutes. Through two periods of play the Frontenacs led the Colts in shots 26-22.

The Frontenacs would storm out of the gate to start the third. Just 11 seconds into the frame Chromiak would beat Silovs gloveside to take their first lead of the night.

Nearing the seven minute mark of the final frame the Colts struck right back with a quick pair to retake the lead.

First Clarke would lead a rush up ice, dishing it off to Jacob Frasca and Cardwell who put it on goal, but it would be Clarke cleaning up the garbage to bury his 2nd of the year. Then just 20 seconds later, Vierling extended his point streak and beat Propp with his 6th to make it 4-3 Colts.

At 12:57, a forced turnover from behind the Kingston net would find its way out front for Aidan Brown to extend the Colts lead on his 12th.

The Frontenacs outshot the Colts again in the third period, unable to solve Silovs once more as he shut the door turning aside another 14 to take the victory.

The Colts will return to action next week with a pair of big divisional matchups. First they’ll host the Mississauga Steelheads Thursday night before another matchup with the Sudbury Wolves Saturday night. Both games on home ice with 7:30pm puck drops.