Colts Pick up a Point in Overtime Loss to the Wolves 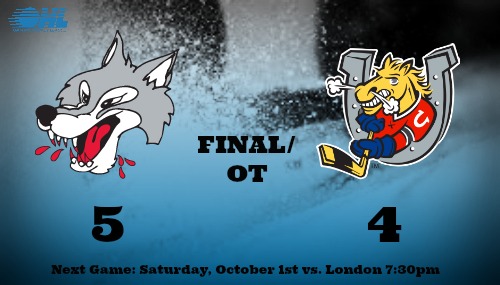 After a brilliant 3rd period comeback, the Barrie Colts gave up a quick one in overtime. Picking up their first loss of the season, 5-4 to Sudbury.

The Colts put on a show in the first period outshooting the Wolves 20-3, yet came out tied at ones. The Wolves veteran Defenceman Kyle Capobianco got the scoring started on their first shot of the game at the 3:02 mark. Liam Dunda and Alan Lyszczarczyk assisted on Capobianco’s first of the season.

Just over five minutes later the Colts were finally rewarded as Roy Radke, playing in his first game of the season tied things up on the Powerplay. Cordell James and Anthony Stefano assisted on the Colts opening goal.

Wolves Jake McGrath was very strong in the first stopping 19 of the 20 Barrie shots he faced.

Sudbury came out much better in the 2nd period of play. They were able to build up a 3-1 lead with goals from the Pilon twins. First it was Darian Pilon scoring his second of the season assisted from David Levin and his twin brother Drake Pilon at 8:45. Just over seven minutes later it was Drake Pilon giving the Wolves a two goal lead. Darian Pilon and Aiden Jamieson picked up the assists on the insurance marker.

The Colts would respond, as rookie Tyler Tucker gets his first career OHL goal at the 17:39 mark of the second period. The lead was back to one but that was short lived, because seconds later, Sudbury’s Owen Lane was hauled down on a breakaway which lead to a penalty shot. He made no mistake and the Wolves had restored their two goal lead despite being outshot 33-17 through forty minutes of play.

In the third it was the Colts who were forced to battle back. Lucas Chiodo got the boys going with a PP goal near the midway mark of the 3rd period. Late in the frame Barrie took a penalty, but it was the captain Cordell James who came up huge scoring a shorthanded marker to tie things up at four, sending the game to overtime.

The overtime period didn’t last very long though, as just 18 seconds in Reagan O’Grady beats Christian Propp to seal the victory for the Wolves and hand the Colts their first loss of the season.

Next up for Barrie is the London Knights on Saturday, October 1st @ 7:30pm for the Colts home opener.