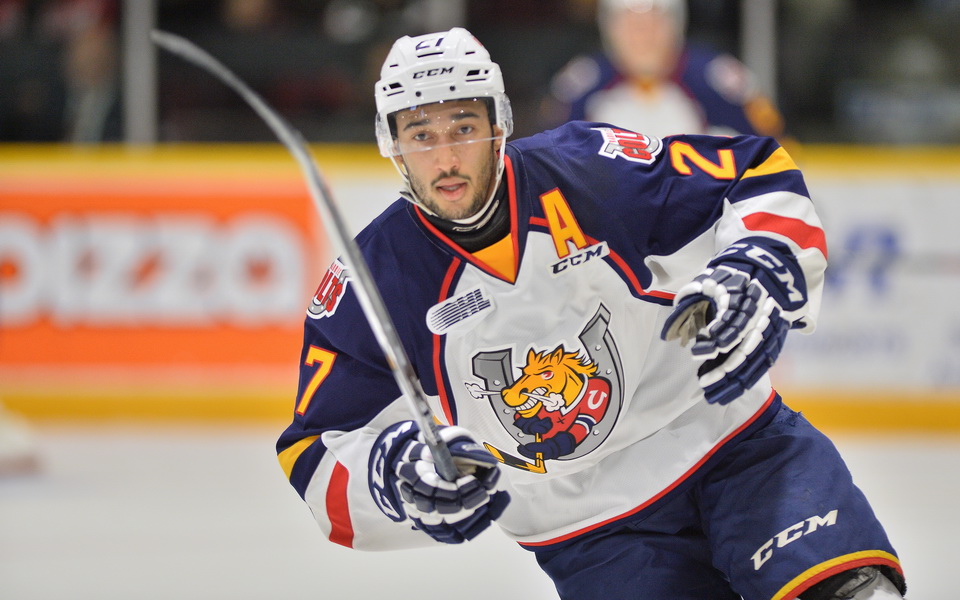 Barrie, ON – Barrie Colts Head Coach Dale Hawerchuk announced today that the team has named veteran forward Cordell James as team captain for the 2016-17 season and will be supported by rotating alternate captains.

James, 20, was selected by the Colts in the 5th round (92nd overall) in 2012 and has spent three full seasons in a Barrie uniform. The Hamilton, Ontario native will become the 18th captain in franchise history and is excited to lead a young crop of new players.

“It’s an honour and a privilege to be named the next captain of the organization,” said Cordell James. “I think we have a good group of young guys and I am looking forward to leading them on and off the ice.”

The 6-foot-2, 221-pound centreman has appeared in 198 career OHL games all with the Colts and set new career highs last year in goals, assists and points. Coming into his fourth season James has racked up 33 goals and 80 points and has skated in 35 playoff games.

“Cordell has been hear for four years now and has a good feel for the Barrie Colts and how the whole team concept works,” said Head Coach Dale Hawerchuk. “He was a unanimous decision amongst the coaching staff and management to take that role. We are excited to have him as our captain.”

This past week, James attended the Dallas Stars training camp as a free agent invite and will now turn his focus back to Barrie where he will look to build off of what his former teammates have taught him during his time in the Ontario Hockey League.

“Over the past three years with the Colts I have been able to learn and take in knowledge from prior captains such as Aaron Ekblad, Joseph Blandisi and Michael Webster; which will help me lead the team throughout the year,” added James.

The defending Central Division Champion Barrie Colts will open their regular season tonight when they take on the Frontenacs at the Rogers K-Rock Centre. Game time is 7:00pm.