Colts Lay a Thumping on Wolves 10-3 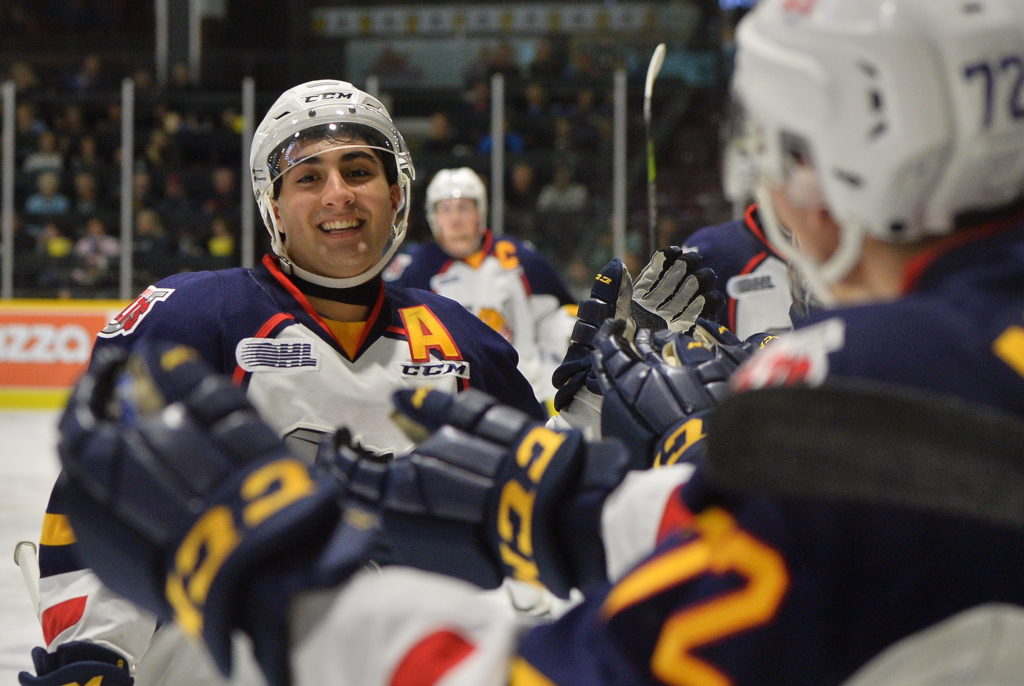 Thursday night was the final game of  a three game home stand to begin the season for the Barrie Colts and they would wrap things up with a big 10-3 victory over their Central Division rival, Sudbury Wolves.

The scoring got started by the visiting Wolves.  On a delayed penalty call it was the number one overall selection Quinton Byfield sending a pass out front to David Levin who fired it past Kai Edmonds for the 1-0 lead.

Barrie would respond quickly, just minutes later after a great defensive play Chris Cameron was able to find Lucas Chiodo streaking out of the zone and put him on a breakaway. He showed off the quick mitts moving Sudbury’s netminder Jake McGrath side to side before sliding the puck home to tie the game.  Matej Pekar tallied the second assist on the tying marker.

Just over fourteen minutes into the frame it was Chiodo, putting the boys in front.  He was able to dance around the net a slip home his 3rdof the season.  Ryan Suzuki and Tucker were credited with assists on the goal.

Barrie came out flying in the 2ndperiod netting two goals in the first minute of play. First off it was a display of power as Tucker absolutely ripped one home from the blueline.  The Colts followed that by sending in Matej Pekar all alone and he pulled off the one handed deke past McGrath ending his night between the pipes.

Just 18 seconds later the hats were flying.  Chiodo sniped one from the top of the circle past the new goaltender Marshall Frappier on his first shot.

He wouldn’t get to face too many more shots as on just his 3rdshot faced he allowed another Barrie Colts goal.  Ben Hawerchuk took a cross crease pass from Jason Willms on the powerplay and put it home, quickly ending Frappiers evening.

There was nothing slowing down this second period as Hawerchuk would put another one home. On a delayed penalty he found the loose puck in front of the net and slammed it into the empty cage.  Pekar and Chiodo drew the assists.

In the third it was another quick start for the home team.  Wills took the puck on the wing and swung towards the net before sliding it home to make it 8-1.

Ryan Suzuki would tally a late shorthanded goal to bring the Colts score to double digits. Chiodo added to his impressive night with an assist.

Barrie is back in action this Sunday as they head to Sudbury to finish off a home and home with the Wolves.  Puck drops at 3:05pm.