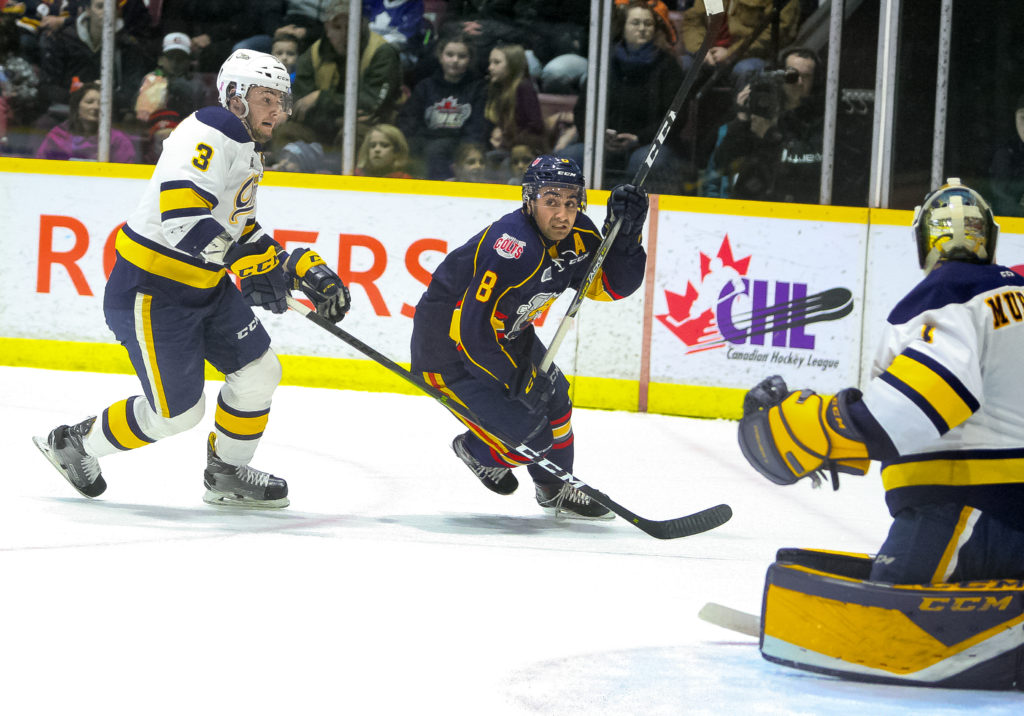 The Barrie Colts kicked off the New Year exactly how they finished the last one, earning back to back victories on home ice holding on for a 3-2 victory over the Erie Otters Thursday night at the Barrie Molson Centre.

Ryan Suzuki potted a goal and an assist including the game winner and Tyler Tucker would contribute three assists earning first star honours while Kai Edmonds turned aside 26 of 28 shots to guide the Colts to their 17th win on the campaign.

Coming into this one the Colts and Otters had been two teams that have slid down the standings looking to improve upon their playoff chances in their first meeting of the season.

The opening twenty minutes would be filled with end to end action. Making his 17th start of the season Edmonds would be tested early coming up with a number of big pad saves to keep things tight.

Just past the midway point of the period Otters starter Daniel Murphy would rob Lucas Chiodo of a sure goal from the right circle. The play would quickly shift into the Barrie zone and just like that the Otters would strike first as Maxim Golod deked past Edmonds to make it 1-0.

The Otters would hand the Colts a 5 on 3 man advantage to finish out the period but they remained down one after twenty with shots in favour of Erie 8-5.

The middle frame would see the Colts run wild as the offense would get the kick start they needed to shift the momentum and take the lead.

At 4:34 of the second, Suzuki would find Ben Hawerchuck out front to one time his 17th of the season under bar to even things up at one. The secondary assist going to Tucker.

The Colts onslaught in the Erie end would continue, with multiple chances just squeaking wide of the net, eventually the boys would pull ahead.

At 6:59 with the Colts shorthanded, Chiodo would get tripped up by Murphy handing the Colts overager a penalty shot, but Murphy would shut him down to prevent the Colts from extending their lead.

Two minutes later, Luke Bignell would finish off some pretty passing and tap in his 5th of the year from Tucker and Matthew Hill.

The Colts would skate into the intermission up 2-1, outshooting the Otters 25-20 after forty minutes.

6:02 into the third while on the powerplay Ryan Suzuki would extend the lead to two as he buried a rebound for his 12th while Tucker and Chiodo would tally assists on the play.

With just 3:30 remaining, the Otters would get back within one with a powerplay of their own, Daniel Singer would snap one off the post and in past Edmonds.

The Colts would hold on in the dyer seconds of the third narrowly missing the empty net and Edmonds making a strong save at the buzzer to take a 3-2 win.

The Colts will continue this four game week as they travel east with a pair of afternoon contests, first to take on the league leading Ottawa 67’s Saturday and will finish out the stretch Sunday with a date versus the Kingston Frontenacs.