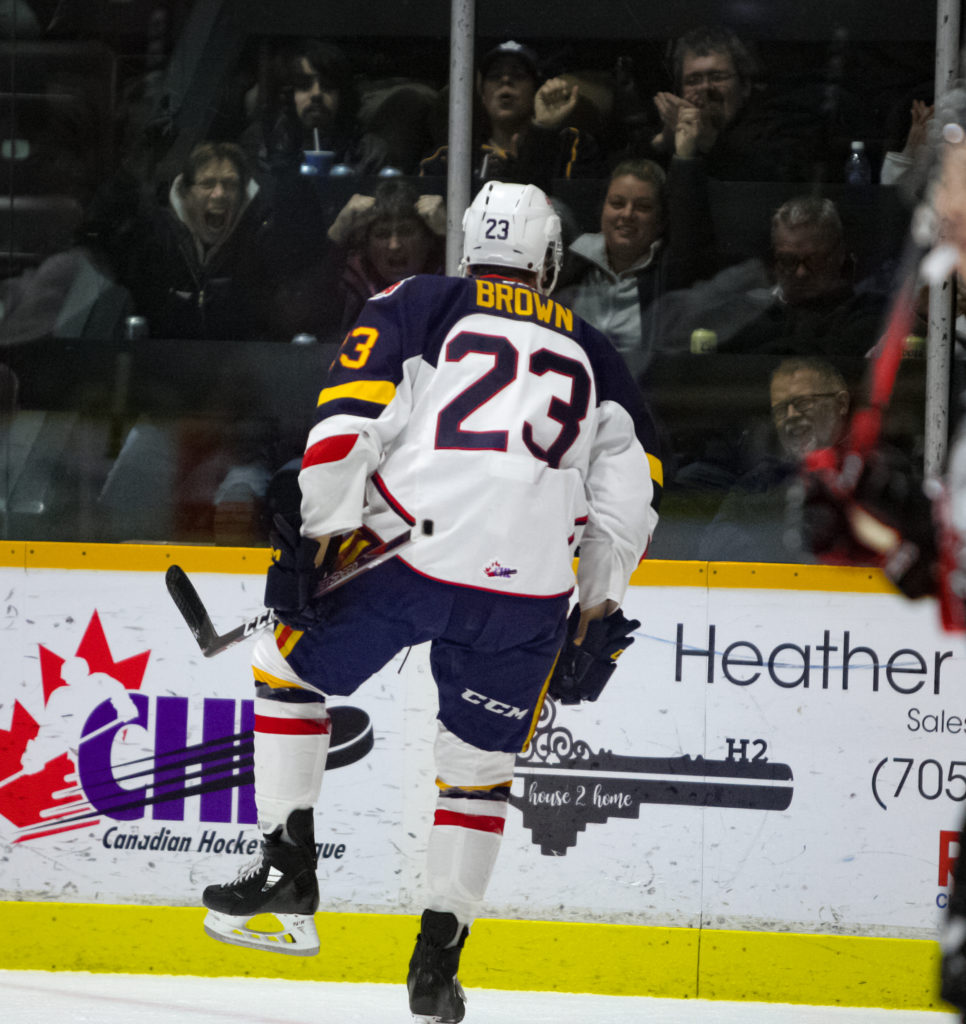 Colts return home to surge past the visiting IceDogs, taking home four points off of the top two teams in the conference.

The Barrie Colts returned to the Barrie Molson Centre Saturday night to face-off against their division opponents, the Niagara IceDogs.  This game marked their third game in three days, and the boys were returning home following a disappointing loss to the Mississauga Steelheads on Friday night.

The IceDogs opened up the scoring just over eight minutes into the first period with a goal by defenseman Elijah Roberts, assisted by Ivan Lodnia.  The latter half of the period saw a few close calls for Colts goaltender, Kai Edmonds, as the IceDogs rapidly increased their attack on net. However, the Colts would take their revenge, as Captain Jason Willms sniped his 17thgoal of the season past IceDogs goalie, Jake McGrath, to tie up the game with less than three minutes left in the period.

The boys weren’t about to let up, and the momentum continued.  With thirty-eight seconds left in the first period, the Colts stampeded past the IceDogs defense once again.  Thanks to beautiful passes from Ryan Suzuki and Aiden Brown, Colts defensemen Nathan Allensen scored his 4thgoal of the season; giving the boys the lead as they entered the second period.  Despite being outshot by the IceDogs 12-7, it was the Colts that came out on top at the end of the first period.

While the second period was underway, the tension between the two teams continued to escalate.  Just over halfway through the period, Barrie found themselves down a player as the result of boarding and cross-checking penalties for Christopher Cameron.  Despite the disadvantage, the boys continued to beat back Niagara’s offense.

As the teams entered into the last minute of play for the second period, it looked as though Barrie would maintain their 2-1 lead over Niagara.  However, with a mere eighteen seconds left in the period, Niagara’s Matthew Philip would take advantage of the jumble occurring in front of the net to tap the puck past a distracted Edmonds and tie up the game.

The beginning of the third period saw much of the action focused in the Colts end; yet, an amazing play saw Suzuki swiftly maneuvering past the IceDogs and connecting with the back of the net for his 20thgoal of the season at less than five minutes into the period.  Unfortunately, the IceDogs were quick to bark back, and Roberts provided an assist to Kyen Sopa, who scored on Edmonds and tied up the game once again.  The two teams were neck and neck, and no one was backing down.

As the clock ticked down and there was just over five minutes left in the game, the Colts decided it was time to turn up the heat and melt the IceDogs.  Suzuki and Brown teamed up once again tonight, with Suzuki and defensemen Jack York assisting Brown in delivering his 12thgoal of the season and edging the Colts past the IceDogs, 4-3.

The excitement continued, as Colts left winger, Dalton Duhart, caught the puck from Tyler Tucker and fired it past McGrath, less than two minutes later.  The IceDogs weren’t ready to lay down just yet, and with just over two minutes left in the game, Ben Jones scored a goal on Edmonds to inch the IceDogs closer to a potential win.

Unfortunately for Niagara, their best efforts just weren’t enough.  Barrie ran down the clock and the buzzer sounded to a huge 5-4 victory for the boys.  It was an exciting game, and a big night for multiple players, as Edmonds recorded an impressive 41 saves, and Suzuki and Brown each finished with a goal and an assist. With this win, the boys are just one point out of a playoff spot.  Colts fans left the BMC ecstatic, with free wings and the hope of a potential playoff spot in their future.

Help cheer the boys onward!  You can purchase tickets for home games online through the Barrie Colts website, by calling 1-888-655-9090, or in person at the Colts Store, located inside the Barrie Molson Centre.  See you at the puck drop!