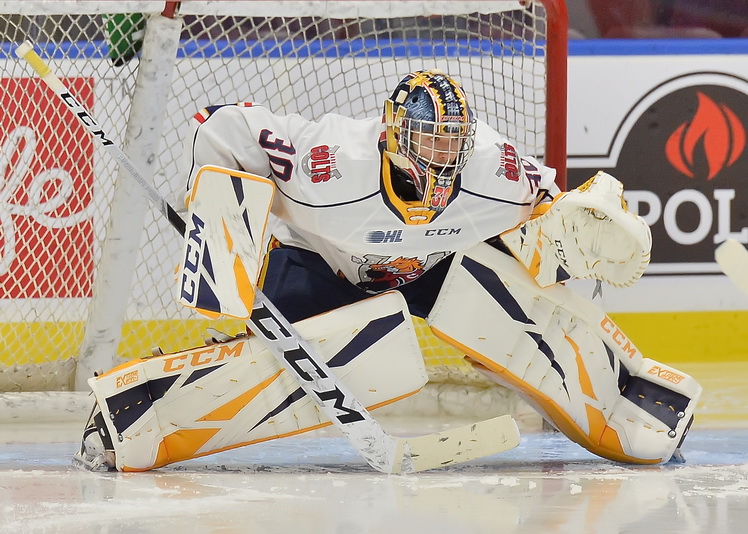 The Barrie Colts managed to survive a couple late penalty calls and a hard charge from the Owen Sound Attack escaping with a 3-2 victory Thursday night at home.

Arturs Silovs would make 40 saves holding off the Attack to pick up his 4th win of the season, while earning first star honours and Tyson Foerster and Matej Pekar would each tally a goal and an assist to keep their point streaks alive.

The Barrie Colts returned to action Thursday night in full redemption mode as they would face off off for the second time this season versus the Midwest division leading Owen Sound Attack. In the first meeting between the highway 26 rivals the Attack throttled the Colts on home ice. A game in which the Colts lost overage forward Jacob Tortora to an 8 game suspension, but would ironically welcome him back to the lineup to face the same foes on this night.

The Attack, coming into Barrie on a 5 game win streak had the Colts poised to respond with a much better effort this time around.

At 13:27 the Colts struck first off a steal behind the Attack’s net. Pekar would pick off the defenders to feed Ryan Suzuki who quickly slid it to Foerster ripping his 9th of season past Mack Guzda giving the Colts the opening lead.

Just over two minutes later, the Attack would even things up with a blast from the point off the stick of Andrew Perrott.

But the tie would be short lived as just over a minute later Tortora would fire a laser pass back door to the tape of Luke Bignell and send the boys into the intermission with a 2-1 lead. The second assist going to Brandt Clarke on Bignell’s 5th of the year.

After twenty minutes the Colts would also lead on the shot clock 22-11.

Midway through the second after a scrum would ensue in front of the Colts net, Barrie would earn their second opportunity on the man-advantage and add to the lead.

At 11:22, Suzuki would send a low shot on net, the rebound kicked straight out for Pekar who buried his 12th of season on the powerplay. Foerster also assisting on the play.

Both teams sent 12 shots apiece towards the goals, with Barrie ahead 34-23 after forty minutes and holding a 3-1 lead into the final frame.

In the third period, with the Colts minds clearly aimed at shutting down the Attacks offense they would do all they could to hold them at bay, creating numerous turnovers, playing a disciplined game in limiting the Attack to any sustained pressure in the offensive zone for much of the period.

With just over four minutes remaining in the third, Owen Sound would finally get into the Barrie zone and pull within one. A quick passing play would be finished off by Sergei Popov to make it 3-2.

As Owen Sound began to press on late in the game the boys would all of a sudden find themselves in penalty trouble. First taking an interference penalty in their own zone and then with an opportunity to clear the zone an errant puck over the glass would end up in the seats and the boys would be forced to kill off a two man advantage with just under two minutes to play.

Silovs would make a handful of stops with the Attack firing from all angles, but the Colts would hold on in a nail biter finish to even the season series.

The Colts now have a day off before getting right back to work Saturday night at home as they host the Niagara Icedogs for a 7:30pm puckdrop.

Tickets for all upcoming Barrie Colts home games can be purchased online, by calling 1-888-655-9090, or in person at the Colts Store located inside the BMC.