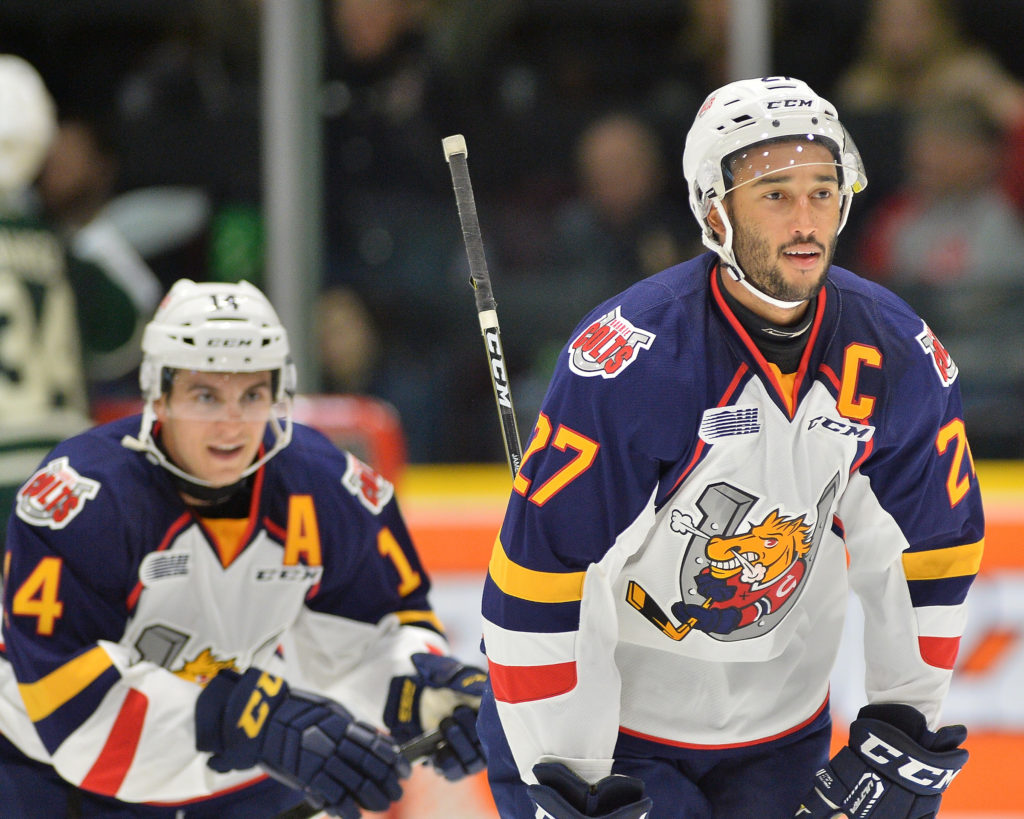 Cordell James recorded his 100th OHL point Thursday evening as the Barrie Colts held off a Hamilton Bulldogs rally for a 6-5 win.

His two assists in the first period helped accomplish the milestone, while half a dozen goals had the Colts leading 6-1 after 20 minutes.

Jason Willms got the party started at 7:08 when he tipped home Giordano Finoro’s low wrist show from the right half-wall.

The captain recorded his 99th career point when he sent a pass to Lucas Chiodo from behind the net, 45 seconds after Willms’ marker, to make it 2-0.

Anthony Stefano redirected a Joey Keane shot at 10:28, but the flood gates opened after Marian Studenic took a five-minute boarding penalty 10 seconds later when he hit Kirill Nizhnikov from behind in the Colts end.

While David Ovsjannikov only faced five shots in the first, he was beat by a well-placed wrist shot.

Michael Cramarossa would break down the ice shorthanded and beat Ovsjannikov over the glove to make it 6-1.

Despite operating on a 17 per cent success rate with the man advantage this season, the first-period success could be credited to the net presence through the power play’s entirety.

Whether it was Cole Ceci or Kaden Fulcher manning the Bulldogs crease, the Colts forwards did their part in taking away their eyes. Tipped pucks and clean shots from the point seemed to be the common theme throughout the first-period onslaught.

The ice tilted into the victim’s favour in the second period however.

A seemingly innocent redirection off Trent Fox’s skate 6:43 into the second period seemed to breathe some life into a muzzled Bulldogs offence.

Ceci, who returned to the game for at the start of the second, made a massive pad stop on Finoro in front, who had the chance to completely take the wind out of the Bulldogs sails.

Matthew Strome is eligible for the NHL Draft next June and he showed why he’s in contention to hear his name called. After he split two defenders, he beat Ovsjannikov low-blocker to halve the Colts lead to 6-3 with less than 10 minutes to go in the second.

John Gruden’s club nearly had their fourth-straight goal on an odd-man rush. When a cross-crease pass made its way over to MacKenzie Entwistle. Ovsjannikov managed to slide across the crease just in time to deny the winger of his tenth goal of the season.

The relentless Bulldogs eventually managed to tally their fourth goal with 40 seconds left in the second.

Adam Laishram buried a rebound just outside the blue paint for this third of the year, cutting the Colts lead to 6-4.

Less than three minutes into the third, the Bulldogs would score their fifth-straight goal (6-5), cutting their deficit to just a single goal when a crowded crease produced a deflection into the back of the net.

Ovsjannikov would ensure that’s a close as the Bulldogs would get.

Two massive saves on Will Bitten later in the third would seal the two points for his club.

First Bitten walked down the right wing but Ovsjannikov snagged his wrist shot out of the air. Then with six minutes left in the game, he slid across the crease to deny Bitten once again.

The Colts now travel to London for a game Friday night against the Knights before returning home to finish off three games in three nights Saturday against the Niagara Ice Dogs.