Colts Get Stung by Sarnia 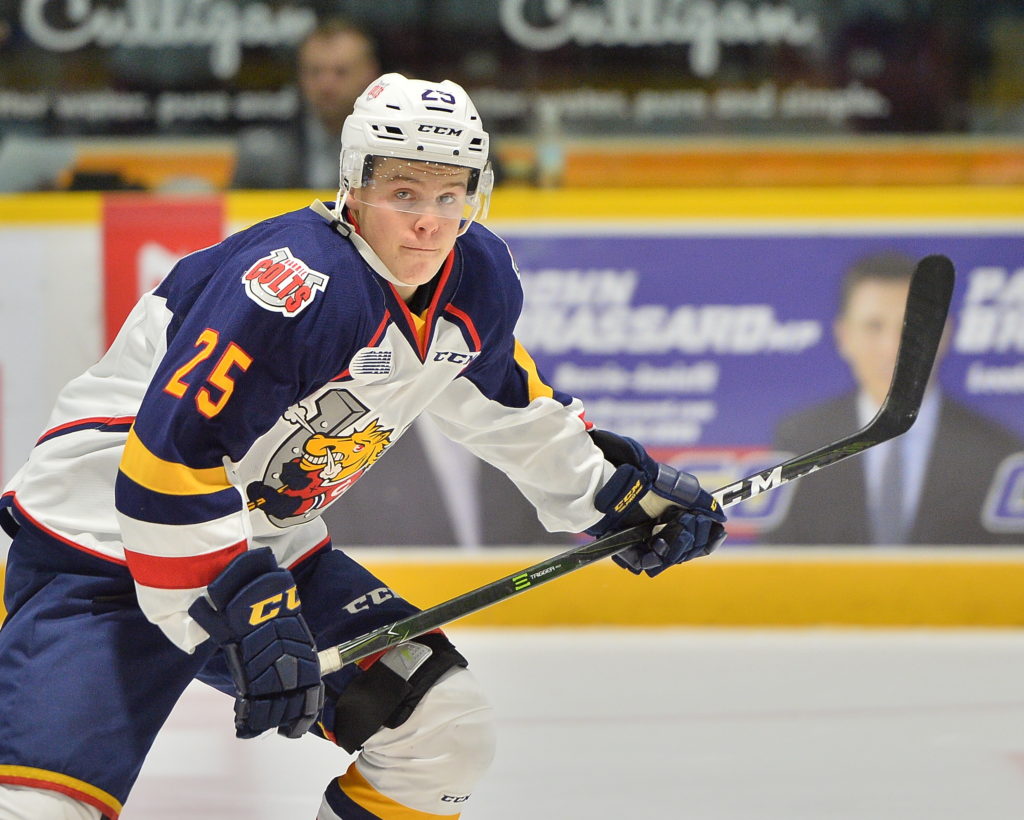 Another slow start for the Barrie Colts would prove costly, as the Sarnia Sting would score three first period goals and skate to commanding 5-2 win Saturday night at the Molson Centre.

The game would get off to a relatively calm start, as both teams finishing up three games in as many nights would attempt to get their legs under them.

Barrie Coming into the night after two hard fought one-goal losses, Thursday and Friday night. While the Sting coming into Barrie were in the finale of a three-stop northern road trip where they had surrendered 7 goals in back to back losses.

Sarnia would get in on the action first, scoring two quick goals to break open this game.

The first would come off a broken play coming into the Barrie zone, the puck would deflect right to Drake Rymsha where he’d quickly shoot one getting under the arm of Colts goaltender Christian Propp.

A minute later, Sarnia would add to that lead, Troy Lajeunesse would step inside the Barrie zone firing a drive from the top right circle over the blocker of Propp to give the Sting a 2-0 lead.

Just past the midway point of the opening period, Barrie would get one back. Jason Wilms, doing the dirty work down low would pass off to Roy Radke. Bringing it to the side of the net Radke would jam one inside the post to get his 12th of the season and bring the Colts back within one.

Before the period was over, the Colts would get caught on another penalty. It would be Rymsha striking again. Barrie attempting to clear the puck would deflect off a leg coming right out front to the stick of Rymsha snapping a quick shot to put the Sting back up by two carrying a 3-1 lead into the intermission.

Barrie would come out of the dressing room in the second looking to strike.

Just over two minutes in, Kyle Heitzner would receive a quick pass up ice from Justin Murray. Stepping over the over the Sting blue line quickly firing a low slap shot squeaking through the pads of Blair Coffin for his 3rd of the season.

That momentum would be short lived as the Sting would come right back. Sean Josling would receive a cross-ice pass right in the slot and beat Propp to the glove side to make it a 4-2 game.

With 24 seconds remaining in the second period, Sarnia’s leading scorer Jordan Kyrou would be given a penalty shot. Kyrou would deke to the blocker side but Propp would force his shot wide of the net to keep the game in reach.

In the third period with both teams beginning to show their fatigue, finding the extra gear to climb back from the two-goal deficit would prove to be to tall a task.

Sarnia would add one more to their lead with just less than six minutes remaining in the third, to finish the game with a final score of 5-2.

The Colts will be back in action next Thursday night versus the Mississauga Steelheads, as they’ll begin another three in three weekend. Puck drops at 7:30pm.