Colts Fall in a Nail Biter 3-1 to Oshawa 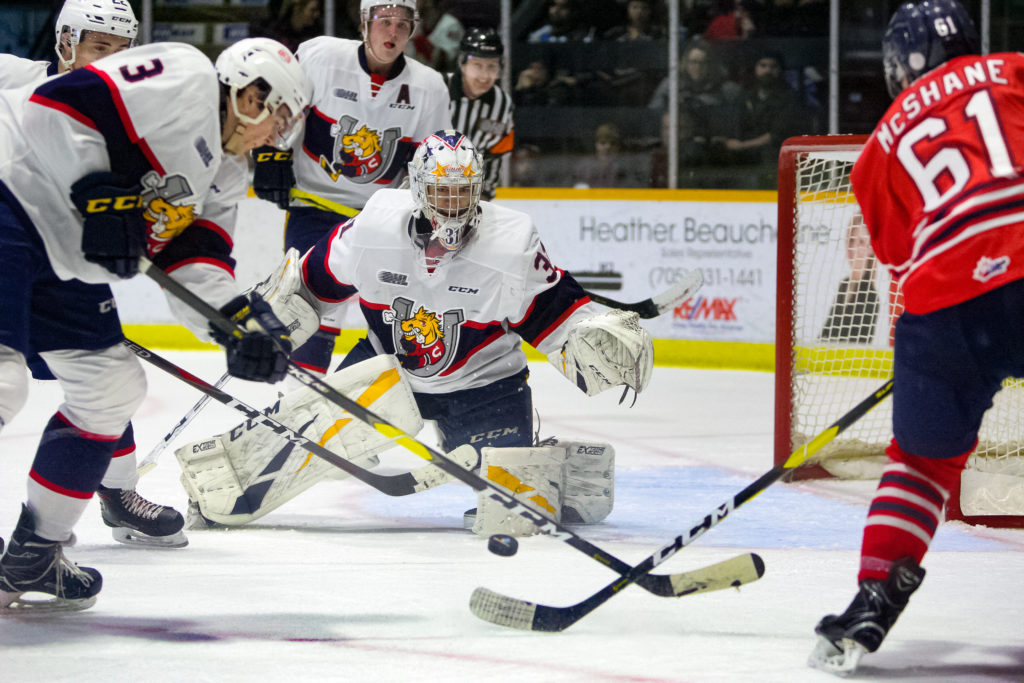 The Barrie Colts put forth a relentless effort Saturday night from start to finish but after a questionable penalty call came late in the third period, it would end up being the difference.

Recently acquired Brett Neumann would sink the Colts with his two goal effort on the night. Capitalizing on a late powerplay and eventually putting the nail in the coffin with an empty netter for the Gens, as they skated to a 3-1 win in front of packed house at the Barrie Molson Centre.

Ben Hawerchuck got the lone goal for the Colts while rookie goaltender Jet Greaves shined once again turning away 35 shots in a stellar performance. At the opposing end American World Junior silver medalist Kyle Keyser held the Colts off on a trio of third period breakwaways finishing with 30 saves in the win.

Squaring off for the third of four times this season, the Colts were determined to get redemption as the Gens had already taken both victories coming earlier in the year and things were about to get tougher. Earlier in the day the Colts would learn they would have to get used to life without Buffalo Sabres prospect Matej Pekar as the Czech forward will be out after suffering a broken collar bone in Thursday nights loss to the Sudbury Wolves.

Barrie resident and free agent signing Jake Partridge made his Colts debut. The former Barrie Jr. AAA Colts forward was originally drafted by the Peterborough Petes, playing 18 games this season before suiting up for his hometown OHL club.

The opening period would see plenty of action as both teams looked to bring the fire to ice.  Greaves getting the call, looked to continue his great play as of late. Winning his previous two starts combining for a .962 save percentage, he showed it turning aside 12 shots in the first twenty minutes.

Late in the period as the Gens would find iron at one end the Colts would turn up ice and get on the board first. Just under the five-minute mark, Hawerchuk would beat Keyser with his 18th of the year. Assists going to Ryan Suzuki and Tyson Foerster.

It looked like the Colts were slated to head into the intermission with the lead but with just over a minute to the horn Brandon Saigeon, the former Hamilton Bulldog would be left alone in the right circle ripping a shot over Greaves glove to knot things up at one.

The intensity and action would continue through forty minutes in this one. With just 11 seconds left on the clock Barrie looked to have taken the lead. A redirected shot off the stick of Hawerchuck would be called back though as goaltender interference was called on the play.

The Gens edged the Colts in shots 24-22 through forty but the score still deadlocked at one heading into a third period showdown.

In the third the action would have Colts fans on the edge of their seats looking for the go ahead goal. A trio of breakaway chances for the Colts and another ring off the post by the Gens, made it evident the next goal was likely the winner.

At 13:56 of the third period a controversial call resulting in a double minor high sticking penalty to the Colts would give the Generals the opportunity both teams were after.

While on the powerplay newly appointed Gens captain would find Neumann out front to bang in the game winner.

The Colts would be given a powerplay of their own in the late stages of the third but with the extra attacker on Neumann would win a battle along the side boards and seal the game at 3-1.

The Barrie Colts will be back in action with two home games slated for the next week at the Barrie Molson Centre. First up Thursday January 17th the Western Conference leading London Knights will come to town and Saturday January 19th against the Soo Greyhounds. Both matchups as always will see a puck drop at 7:30pm