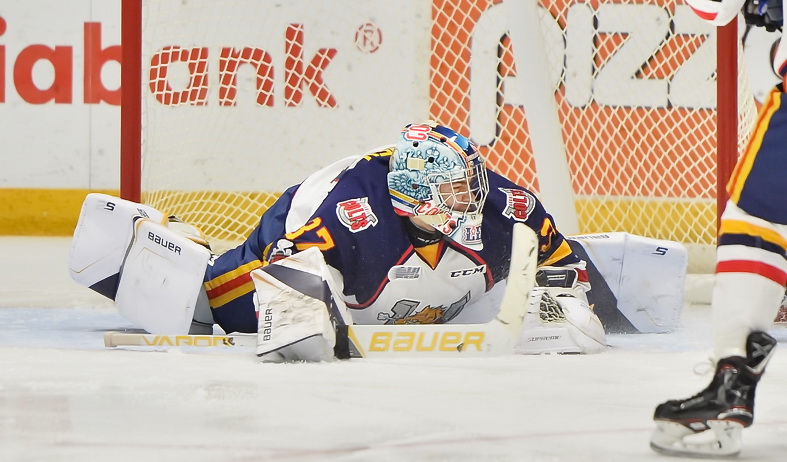 The Barrie Colts would make a late comeback bid versus the Mississauga Steelheads Thursday night but would not be enough falling 7-4.

Andrei Svechnikov and Aaron Luchuk would extend their point streaks to 16 and 13 games respectively and Dmitry Sokolov would add a goal and an assist on the night, but the Colts struggles against the central division rival would continue on this night.

The Colts were back in action Thursday night for the first of three games heading into the weekend taking on the Mississauga Steelheads. Earlier in the week Colts overage veteran Aaron Luchuk received the CHL player of the week honours after recording nine points in three games including three goals and six assists last week.

It was the visiting Steelheads opening up the scoring nearing the five minute mark of the first period. Matthew Foget would come streaking down the right wing wristing a low shot off the pad of Lazarev. The rebound would go straight onto the tape of Michael Little and into the back of the net to make it 1-0 for the fish.

Just past the midway point of the first, the Steelheads would increase the lead to two.   With the Colts hemmed in their own end Stephen Gibson would play a bank shot off the left end boards for Ryan McLeod to pick up and sneak a wrap around behind Lazarev making it 2-0.

The beginning of the second period wouldn’t get much better. Just 34 seconds in the Steelheads top line would strike again.

Owen Tippett would send shot on goal, Lazarev would make the initial pad save but Little would be on the doorstep once again to tap in his second of the game giving the fish a three goal lead.

Just three minutes later though the Colts would get the opportunity they needed.

While on the powerplay Dmitry Sokolov would find himself alone in the slot wristing one by the glove of Emanuel Vella for his 40th of the season to get the Colts on the board and decrease the lead back to two. Aaron Luchuk and Andrei Svechnikov would pick up assists on the goal.

The momentum would be short lived. Five minutes later the Steelheads would jump on their own powerplay after the Colts would get called for too many men.

After a scramble would ensue in front of the Barrie goal, Nicholas Canade would bang home another rebound to put the fish ahead by three once again.

Just moments later while on the powerplay, Tippett would cruise in unscathed sniping one under the bar meaning the end of Lazarev’s night in favour of rookie Kai Edmonds which seemed to spark the boys.

Just one shift later the boys answered right back. Svechnikov would snap a shot from the left wing, Vella would make the blocker save but Joey Keane going hard to the net would bury the rebound for his 10th of the season to make it 5-2. Svechnikov and Luchuk would both pick up their second assists on the night.

That’s the way the Colts would finish the second requiring a big comeback effort heading into the final period of play.

Jason Willms would lead the charge just over four minutes into the final frame. Nathan Allenson would send a pass up ice to find Willms alone over the Steelheads blueline, streaking in he’d wire a shot top shelf over the glove of Vella to get the Colts within two.

The Colts powerplay would go to work once again just past the midway point of the third and Svechnikov would make the fish pay. T.J. Fergus would move the puck to Svechnikov at top of the circle snapping a bullet blocker side past Vella for his 34th on the campaign to get the Colts back within one.

The Colts would keep coming with pressure out shooting the Steelheads by a wide margin but the Fish wouldn’t quit either ending the comeback bid.

With just over four minutes remaining Cole Carter would pick off a loose puck at their own blueline and skate in on the breakway beating Edmonds five hole to give the Steelheads the two goal lead back.

With the Colts net empty Foget would finish things off adding one more to the total to make it 7-4.

Next up, the Colts will be right back in action on home ice Saturday night as they take on the Oshawa Generals at 7:30pm