Colts End 2019 with Shootout Victory over the Storm 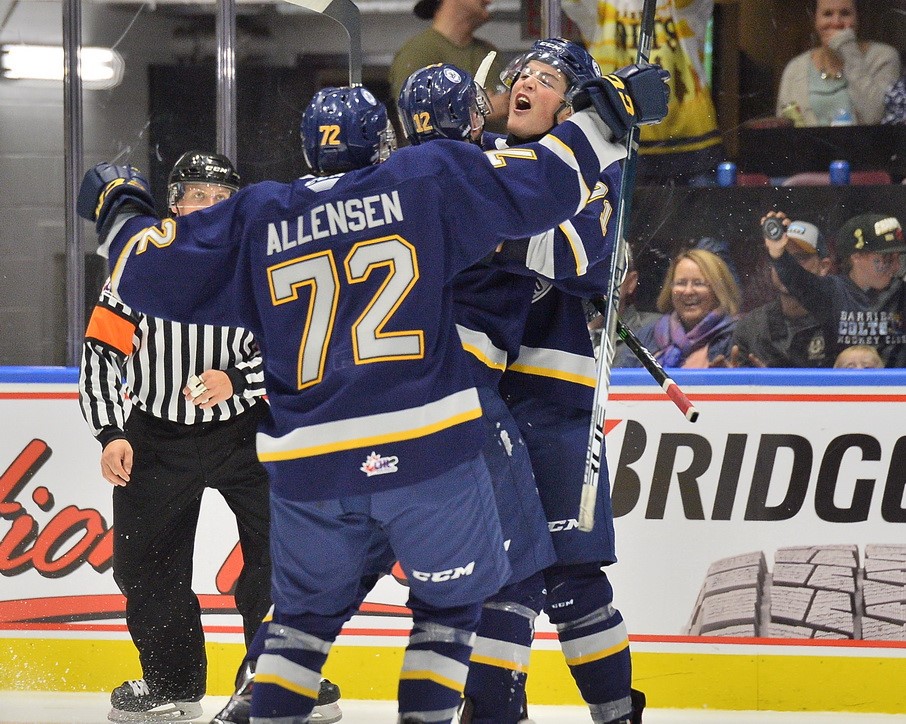 Jet Greaves would make 34 saves including all three attempts in the shootout and Tyson Foerster would get the lone goal to give Barrie a 4-3 victory.

The win for the Colts finishes off a three game stretch in four nights in which the Colts earned five of a possible six points to keep pace in the fight for top spot in the Central Division.

Colts captain Jason Willms lead by example once again adding two goals on the night including the equalizer in a wild third period to get the Colts to the extra frame.

Barrie welcomed the Guelph Storm into town Tuesday night in front of a sold out crowd in the annual New Year’s Eve game. Coming off a huge 52 save performance Sunday in Owen Sound, Jet Greaves and the rest of the Colts were looking to start a new streak in the win column.

The second and final meeting of the season with the Midwest division leading Guelph Storm, the Colts knew it would be a tough test as the Storm took this seasons first matchup by a score of 4-0.

It was a slow start for the Colts in the games opening period. Guelph would storm out to an early 2-0 advantage lead by the hot stick of Pavel Gogolev.

Just over five minutes into the first the Storm would break into the Barrie zone on a 2 on 1. Eric Uba slid it across for Gogolev and he ripped a shot over a sprawling Greaves. At 11:35, Guelph captain Cam Hillis added their second of the period. Greaves made a number of stops in tight, but Hillis would clean up the rebound to make it 2-0.

The Colts switched gears during the intermission and quickly cut the lead in half. Just 43 seconds into the middle frame Ryan Suzuki would slide a pass across for Nihcolas Porco and wrist his 6th of the season by Bennett. The Colts opening goal also assisted by Brandt Clarke.

The boys kept the pressure coming and six minutes later Guelph would get called on a hooking penalty opening the door to knot things up.

Nathan Allenson would send a blast from the point, the shot would be tipped in front by Willms for his 16th of the season. Ryan Suzuki collected his second assist on the powerplay goal.

A late five minute major boarding call would put the Colts penalty kill to the test late in second. Already with a short bench the Colts would lose Aidan Brown for the remainder of the game.

With 2:29 remaining in the second, Keegan Stevenson would get the last stick on a bouncing puck in the Colts crease and restore the Guelph lead to 3-2.

Things would get evened up as Guelph would get called on a penalty halfway through the kill and the boys would escape the second period just down by one.

In the third the just over five minutes into the final frame the Captain went to work. Winning a draw directly back to Allensen, he fired the one timer on net, the rebound going right to hard charging Willms. he buried his second of the night and 17th of the year to make it a 3-3 game.

In overtime, the penalty kill once again had to come up huge as a slash was called 3:19 into the extra frame. The boys managed to fend off a highly skilled Guelph powerplay eventually drawing a penalty as well and the game would be off to the shootout.

Foerster was up first for the Colts and put away the only goal of the shootout and Greaves turned all three shooters away to give the boys the extra point.

The Colts will now have a couple days off before heading north to face off against their central division rival Sudbury Wolves on Friday.