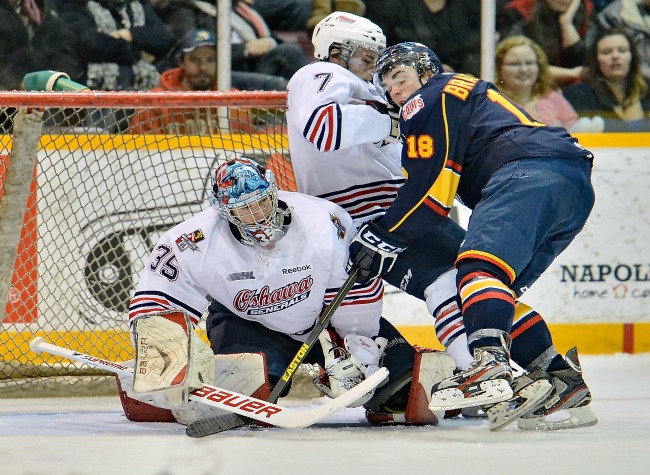 Friday kicked off Thanksgiving weekend and featured the second game of a home and home series featuring the Oshawa Generals and the Barrie Colts. The Generals were looking to extend their winning streak to five games Friday night at the General Motors Centre in Oshawa against the Colts, whom Oshawa had narrowly defeated the night before in Barrie. The Colts, we’re looking to answer back for the loss the night before and upset the local Oshawa team on home ice.

Michael Dal Colle was looking to add into his impressive assists streak, which climbed to 6 over the last four games. Scott Laughton was also coming off an impressive four game return to the OHL accumulating a total of 4 goals and 6 assists. His return did not go unnoticed, as the 19-year-old Flyers draft pick was named OHL Player of the Week on Monday to cap off his stellar return.

It didn’t take long for Laughton to get into the action, as it was number 21 himself who notched the opening goal of the contest off assists from Cassels and Brown. It took until the 2-minute mark of the period for Barrie to answer back. Erik Bradford buried his third of the season off an assist from Matthew Kreis to tie the game at one. It looked like it was going to remain a tie leading into the second, until Cole Cassels put the Generals in the lead with his goal at the 14-second mark of the first period.

The third period remained a tight game. Kenny Appleby was solid in net for the Generals stopping 22 of the 23 shots he faced. Both sides had their scoring chances, including a Colts power play that featured Cole Cassels battling in front of the net without a stick to help Oshawa kill the penalty. In the end, the score would remain 2-1 Oshawa on Cole Cassels game winning goal.

The Barrie Colts will host the visiting Mississauga Steelheads Saturday night at the Barrie Molson Centre. Puck drop is 7:30.