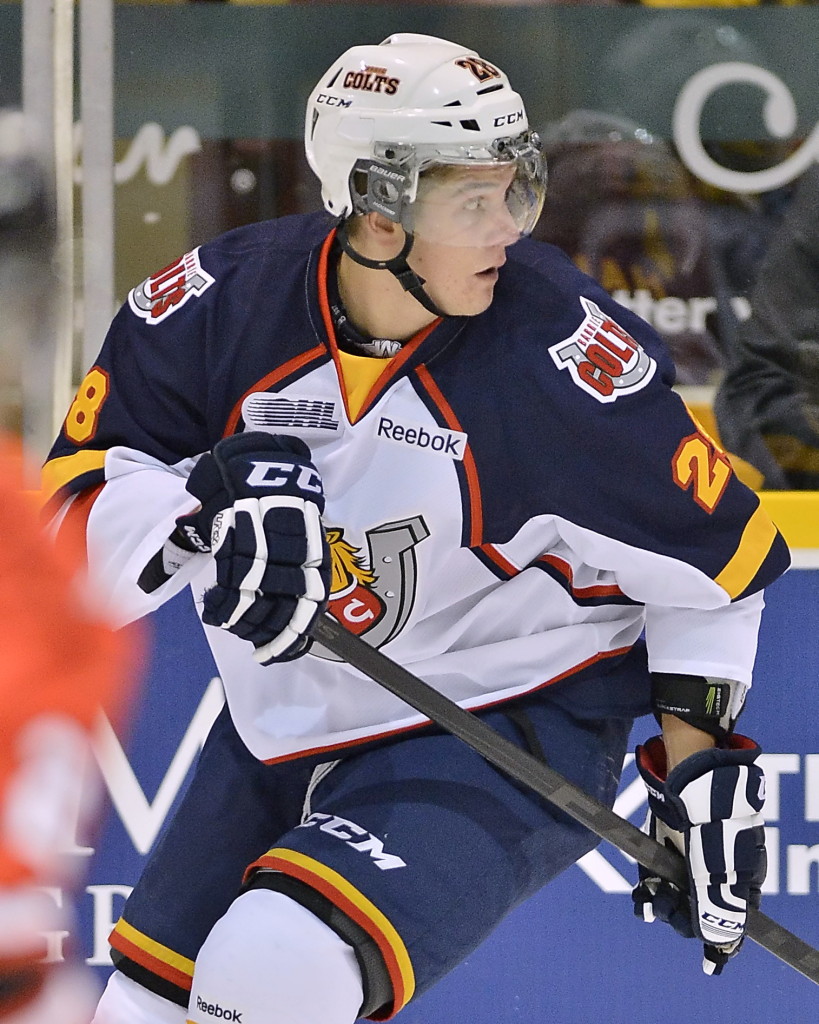 The Barrie Colts were involved in a hard fought battle on Friday night and another come from behind victory was on the menu.

The Colts found themselves down early when Plymouth opened the scoring at 3:44 of the first period. A Ryan Hartman shot off the crossbar and in gave the Whalers the 1 – 0 lead. Barrie would respond quickly though and tie the game back up just 24 seconds later. Mark Scheifele scored his first goal since being sent back from the Winnipeg Jets off a point shot that was tipped by Anthony Camara right to Scheifele at the side of the net. Aaron Ekblad was also credited with an assist. Vincent Trocheck would add two more goals for the Whalers as they took a 3 – 1 lead heading into the second frame. Plymouth outshot the Colts 12 – 5 in the period.

The Barrie Colts turned the page in the second period and dominated the play. Midway through the frame Mitchell Theoret would notch his 21st goal of the season. A jammed play in front of netminder Matt Mahalak saw Theoret bang home the loose puck and cut the deficit to 3 – 2. Andreas Athanasiou and Brendan Lemieux were credited with the assists. Despite out shooting the Whalers 14 – 5, the Colts could not add another goal and would head into the third period down by one.

Both teams came out hard in the final period trading chances at either end. A power play opportunity for the Barrie Colts midway through the period would lead to the game tying goal. Mark Scheifele busted down the wing before riffling a backhand pass to Zach Hall in the slot. Hall made no mistake hammering home a one timer to the back of the net to notch the game at 3. Barrie would take their first lead of the game again on the power play with 4:45 remaining in the game. A stretch pass from forward Steven Beyers sent Anthony Camara in all alone where he buried his 29th goal of the season, giving the Colts a 4 – 3 lead.

Andreas Athanasiou and Josh MacDonald each added an empty netter to put this game away and seal the 6 – 3 road win. Five unanswered goals led the Colts to victory while Mathias Niederberger put forth a solid effort making 25 saves on the night. Steven Beyers had three assists on the evening, while Mark Scheifele had two points in his first game back with the Barrie Colts.

Barrie (34-15-0-2) will now head to Saginaw to face the Spirit on Saturday for the second of three games this weekend.