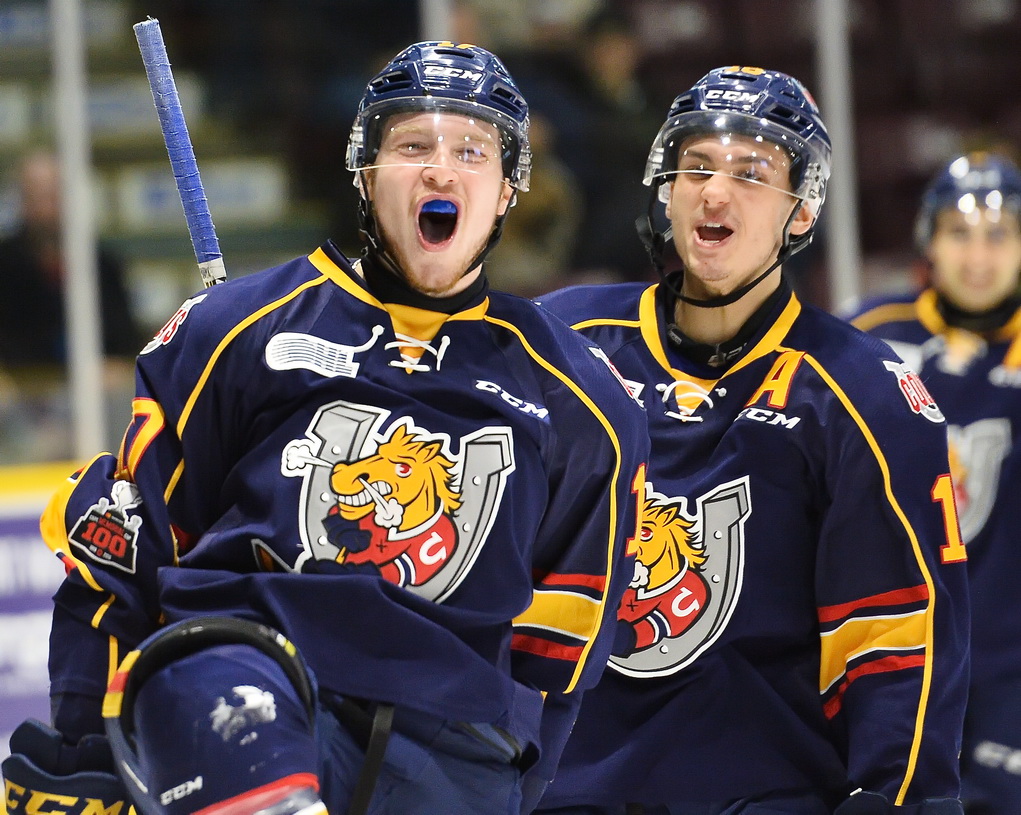 The Barrie Colts kicked off another busy stretch Thursday night in a big way. The first of three games in three nights looking to end their losing skid, the Colts offense was on full display putting up their highest goal output since opening night in a 10-1 route of the Sudbury Wolves.

Leading the way was Jaden Peca with 2 goals and 2 assists while seven other Colts players would have multi point games.

Lucas Chiodo would gain 2 assists on the night to give him 100 career OHL points and Leo Lazarev making his 31st start of the season would make 23 saves to earn the victory.

With the OHL trade deadline passing the day prior, the Colts would acquire Dmitry Sokolov from the Wolves. Going the other way back to Sudbury would be first year forward Alexey Lipanov.

The two Russians would immediately get the opportunity to face their former clubs and Sokolov would earn his first points as a Barrie Colt putting up a goal and an assist in his debut.

The Colts would get things started in the first nearing the midway point of the period.

Just as the Colts would kill off a penalty, Peca would hit Nathan Allenson right on the tape streaking out of the penalty box. The defenseman would make no mistake on the breakaway beating Wolves starter Jake McGrath to the blocker side for his 2nd goal of the season giving the Colts the first lead of the game.

With just over a minute left the Colts would increase the lead to two.

While on the powerplay, after receiving a perfect saucer pass cross-ice from Sokolov, Andrei Svechnikov would snipe one past McGrath for his 16th on the season.

Early in the second period some four on four action would lead to the Colts going up by 3.

Svechnikov would win the battle off the wall in the Wolves end and slide the puck over to Aaron Luchuk going bar down for his 34th of the season.

After being denied earlier on a penalty shot Zach Magwood wouldn’t miss on his next opportunity. Breaking into the Wolves zone Jason Willms would slide a pass to the middle for Magwood, he’d deke to the backhand to earn his 17th goal of the season to push the Colts lead to 4. Peca would also assist on the play.

The Colts would keep the pressure coming. With just 51 seconds remaining in the middle frame Sam Rhodes would grab the loose puck in the slot and quickly turn and fire a shot top shelf past McGrath for his 2nd on the campaign, giving the Colts a 5-0 lead heading into the third.

The Scoring would continue often in the third. Just 14 seconds in, Peca would be sprung by Joey Keane on another breakaway picking the corner to make it 6-0 on his 7th of the season.

Just 46 seconds later, the Wolves would finally breakthrough. After Lazarev would make the initial save, Darian Pilon would jump on the rebound to get Sudbury their only goal of the game.

At 5:16, Sokolov would join in on the action. Skating around a defender he’d rifle the shot past McGrath to register his 1st goal as a Barrie Colt and 21st of the season with Chiodo and Ben Hawerchuck assisting on the play.

The Colts would chase McGrath from the net just minutes later. On another powerplay, Ryan Suzuki would turn and throw a backhand along the ice for his 8th.

After having a goal called back from an offside review, 7 seconds later Peca would add one more for himself on the night tapping in a cross ice pass from Willms.

Magwood would add his second of the night as well with 28 seconds left in the game to finish things off at 10.