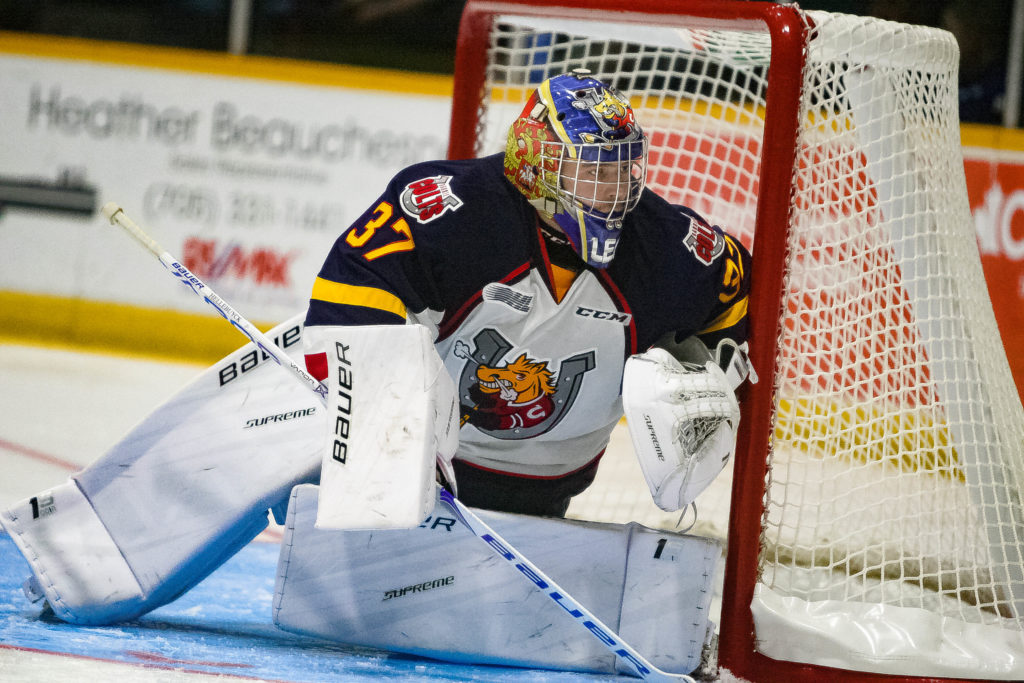 Leo Lazarev would make all 38 saves in his 10th start of the season to recording his 2nd straight shutout and Zach Magwood would extend his point streak to 7 games with 2 goals and an assist leading the Colts to a 6-0 victory over the Hamilton Bulldogs.

In a game that began with much of the play being held in the Barrie zone, Leo Lazarev would do all he could to give his team the boost they needed. Even if it meant making one of the biggest bodychecks of the game himself.

From the midway point of the first period it was all barrie with Magwood leading the charge for the Barrie offense registering three points. Curtis Douglas, Luke Bignell, Jason Wilms and Mathew Hill would all register one of their own in the win.

The boys would return home Thursday night coming off a strong rebound win on the road last Sunday against the Oshawa Generals and would look to keep the foot down continuing their strong play. Barrie would be looking for redemption in this the second meeting of the season, the Bulldogs took the first matchup of the season in a shootout.

Just over 8 minutes into the first Aiden Brown would snap a quick shot on goal from the point, Bulldogs starter Kaden Fulcher would make the initial save, but Bignell would be right on the doorstep to bury his 4th goal of the season to give the Colts the opening lead of the game. Also assisting on the play was Tyler Tucker.

Barrie would continue the pressure. At 12:40, the lead would increase to two. Alexei Lipanov would gather the puck low in the Bulldogs zone cycling it to Ryan Suzuki, he’d find Magwood alone in the slot, firing a laser top corner over the glove of Fulcher for his 8th on the campaign.

The bad blood would get started early in this one. Colts Captain Justin Murray would drop the gloves with Matthew Strome. As Murray was escorted off the ice, Justin Lemcke attempted to draw Murray in again forcing Christopher Cameron to jump in.

After all the penalties were assessed the Colts somehow found themselves on a seven-minute penalty kill to finish out the opening period.

Not forgotten in all the action was Lazarev who was tested often in the first half of the period, but made all 14 saves to hold the 2-0 lead heading into the intermission.

Just over two minutes into the second the Colts offense would keep it coming. While on their first powerplay, once again Magwood would rifle a perfect shot just under the bar for his second of the game past Fulcher, extending the lead to 3. Tucker and Douglas would assist on the play.

The Colts would take it to the Bulldogs throughout the second outshooting them 18-8 and keep the score 3-0 through 40 minutes.

That momentum would carry into the third where a pair of goals would come just five minutes into final frame.

First up it would be a relentless forecheck by Douglas forcing the Bulldogs defense back and eventually banking off his leg into the back of the goal. Just 26 seconds later Jason Willms would be sprung free down the left wing sliding one under Fulcher’s pad for one of his own.

Both players would collect their 5th goals of the season.

Barrie would add one more for good measure with 4 seconds remaining. Matt Hill would rip a shot from the point deflecting off a Bulldogs stick for his 1st career Ontario Hockey League goal.

The Colts will be right back at it Saturday night as they take on the Mississauga Steelheads for a 7:30pm puck drop at the Molson Centre.