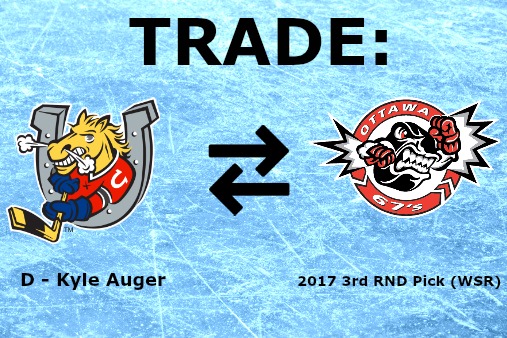 Barrie, ON– Barrie Colts General Manager & Head Scout Jason Ford announced today that they have completed a trade with the Ottawa 67’s.

The Colts acquire a 3rd round pick (Windsor’s) in 2017 from the 67’s in exchange for defenceman Kyle Auger.

Auger, 17, appeared in 28 regular season games last year for the Spitfires, tallying 1 goal and 2 assists for 3 points with a +7 rating. The former second round-pick from Thunder Bay, Ontario was dealt to Barrie this past June and he skated in five pre-season contests with the Colts recording 1 assist.

The Barrie Colts (2-1-1-0) will face divisional opponent the Sudbury Wolves tonight at the Barrie Molson Centre. These two clubs faced off for the first time last Friday, which saw the Wolves win in overtime 5-4. Puck drop is 7:30pm.