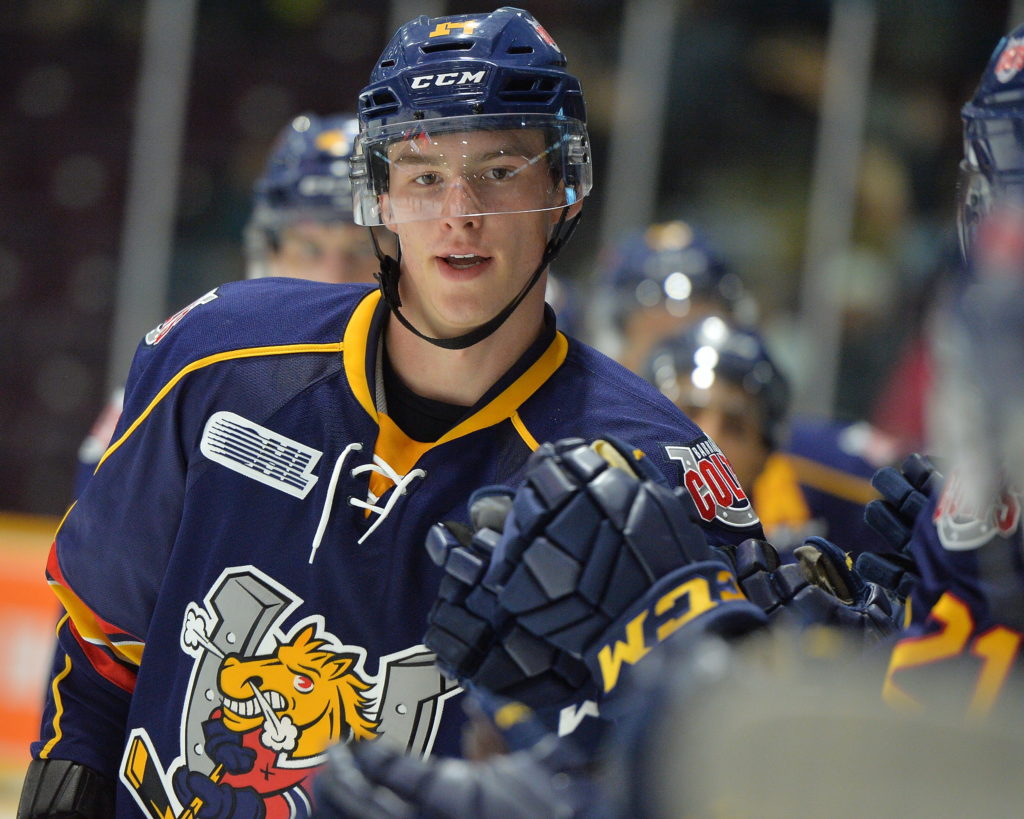 Andrei Svechnikov would lead the Colts offense recording the hat-trick and Aaron Luchuk would add to his league leading goal total with one of his own and 3 assists as the Colts would cruise to a 6-2 victory over the Windsor Spitfires Saturday night.

Coming off a big road win in London the night prior the Barrie Colts would look to continue their recent momentum to make it two in a row on back-to-back nights returning home .

It would be a slow start for the boys in their third game of the week. Early on the Colts would find themselves down two men forcing Leo Lazarev to come up big on a number of occasions and bring a relentless effort from the Colts penalty killers to stave off the Spitfires attack.

That would shift the momentum quickly. Just as the penalties would end the Colts would strike first.

Luchuk would drop to Svechnikov skating in on the right side and roof one over the shoulder of Michael DiPietro for his 25th of the season to give the Colts the opening lead. Also assisting on the play was Tyler Tucker.

The Spitfires would answer back just minutes later. It would be former Colt Curtis Douglas firing a laser over the shoulder of Lazarev to tie things up at 1.

The Colts would come out flying in the second. The sustained pressure would draw a tripping penalty and the Colts would go on the attack.

On the powerplay Zach Magwood would breakthrough the neutral zone splitting the Windsor defenders deking to the backhand on DiPietro. He’d make the first save but Dmitry Sokolov would be right on the doorstep to cleanup the rebound for his 30th of the year. Luchuk would pick up an assist on the go ahead marker.

Just past the midway point of the middle frame it would be the Colts turn on a 5 on 3 powerplay to increase the lead.

The Colts would work the play around trying to find every angle to get a clear shot on DiPietro. Just as the first penalty would expire Magwood would feed Luchuk to blast a one timer from the point for his league leading 39th goal of the season to put Barrie ahead by two.

The Colts would finish the second outshooting the Spitfires 28-18 and take the 3-1 lead into the third.

Less than three minutes into the final frame the Spitfires would cut into the Barrie lead. Jake Smith would wire a shot along the ice off the post and in past Lazarev, making it a one goal game.

Nearing the midway point of the period Svechnikov would respond with his second of the night while short handed.

Luchuk would chip the puck free and Svechnikov would break in. While falling to his back, he’d slide a backhand between the legs of DiPietro to put the Colts back up by two marking his 26th of the season.

Windsor would push the attack late not going down easy. In the late minutes of the period the Colts would fend off multiple penalty kills and Lazarev would continue to stand tall.

The Spitfires would pull Dipietro with just under a minute left and would open the door for Jason Willms to seal the victory with his 22nd on the season.

And with just 11 seconds remaining Svechnikov would beat DiPeitro once again to record the hattrick and his 26th of the season.

The Colts next home game will be Saturday February 8th versus the Flint Firebirds, puck drop scheduled for 7:30pm.