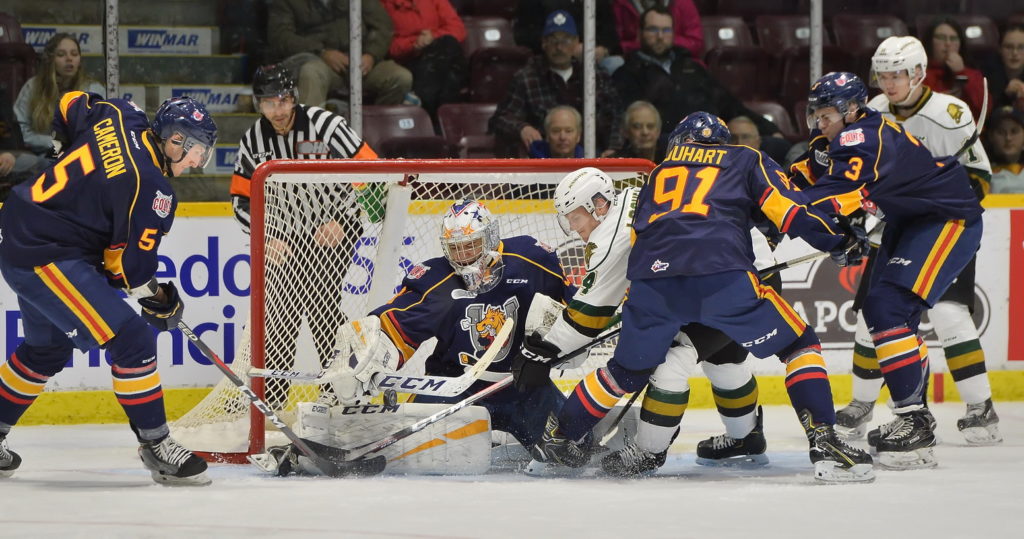 A huge confidence building victory for the young Barrie Colts squad over the Western Conference leading London Knights has the boys charging in to the weekend.

In his first game versus his old team, Dalton Duhart would score the game winner for the Colts early in the second period, and another strong performance by Jet Greaves saw the rookie turn aside 32 shots to escape with the win.

Thursday night the Colts would play host to the Western Conference leading London Knights and welcome back former Colts defenseman Joey Keane, who recently moved to the Knights prior to the OHL trade deadline.

The game’s opening period wouldn’t show much on the shot clock, but not to say it wasn’t an eventful frame as it was clear neither team was willing to go down without a fight.

The Colts would break the ice nearing the midway point of the opening period. A great solo effort by Suzuki saw the Colt deking through a number of Knights defenders before slipping a shot under the pads of Raaymakers. This marked his 13th of the year for the Colts Assistant Captain, who was recently named to the CHL Top Prospects game.

Thanks in part to multiple penalties to the Knights, the Colts would get a late 5 on 3 man advantage.  However, the league’s number 1 penalty kill unit would hold the Colts off keeping the lead at one heading into the intermission.

The offense would come to life in the second and the Knights potent attack would get on the board early on. After Greaves would make the initial save on Josh Nelson, the rebound would kick straight out to Liam Foudy, who banged home the tying goal.

Just a couple minutes later with former Colt Joey Keane in the box, Barrie would respond to take the lead right back.

While on the powerplay Tortora would find Suzuki sneaking in back door from the point one timing his second of the game and 14th of the campaign past a sprawling Raaymakers.

Keeping the pressure on Barrie would strike again. The former knight Duhart would get one against his old squad, tapping in a loose puck in the crease. Luke Bignell and Matthew Hill would gather helpers on 3-1 goal.

The whistles wouldn’t go away and soon it would be Barrie filling up the box giving way to the Knights powerplay unit.

Just a minute into the kill and the Knights with their own 5 on 3 advantage, Adam Boqvist would snap a shot by the glove of Greaves to get back within one.

It would be a fully defensive minded third for the young Colts squad as Greaves and the boys would turn aside every scoring chance the Knights could throw their way.

Despite being outshot by the Knights 34-21 the buzzer would sound marking the 19th win of the season for the Colts.

The Colts will be back in action Saturday night at home once again and it won’t get any easier as another top Western Conference squad, the Sault Ste. Marie Greyhounds will make their lone appearance of the season to the Molson Centre.