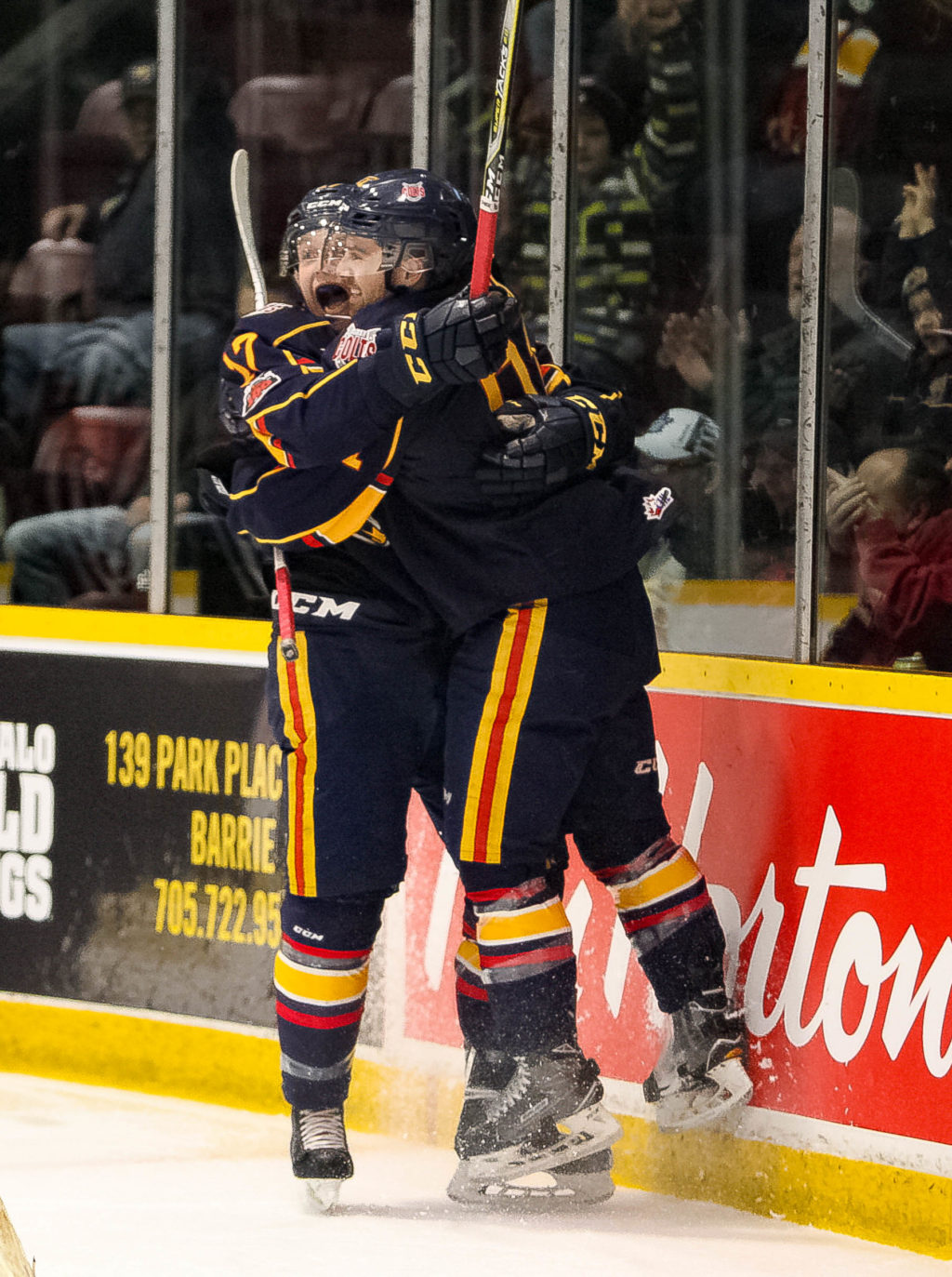 A wild afternoon had a bit of everything in a 8-2 Barrie victory in game six to wrap up the series 4-2 against the Mississauga Steelheads.

Game six of this Eastern Conference Quarterfinal matchup started with a bit of a delay. Originally schedule to start at 2pm had the start time pushed back 40 minutes due to a score clock malfunction.

The game got off to a quick start as the Steelheads’s Owen Tippett worked his way to a breakaway but Leo Lazarev made the big stop to keep it scoreless.

Back the other way, the Colts put some pressure on Jacob Ingham who was back in between the pipes after being given the night off last night in Barrie. They came up with a couple of quality chances but Ingham was able to keep them out.

Took a while before the scoring was started in this one and for the first time in the series it was Mississauga taking the first lead of the game. On a broken play that had multiple players misplay the puck it bounced around and eventually between the legs of Leo Lazarev to give the Fish the 1-0 lead. Michael McLeod was rewarded with the goal.

Early in the second the Steelheads would strike again. On an odd man rush McLeod dropped the puck for Cole Carter to setup a two on one and he snapped it behind Lazarev to give Mississauga the 2-0 lead.

Barrie would take a couple penalties in the middle of the second period to put them on their heels. After some big goaltending and good penalty killing they were rewarded with their efforts. First it was Andrei Svechnikov right out of the box grabbing the puck and moving into the Mississauga zone. He found himself behind the net and sending it out front to Aaron Luchuk who buried it past Ingham to get them on the board and cut the lead in half. The goal was his 3rd of the playoffs as Nathan Allensen also assisted on it.

Right off the ensuing faceoff the Colts would move down the ice and score again. It was some beautiful puck moving by Barrie as Ryan Suzuki moved it wide for Lucas Chiodo who fed it back across for Zach Magwood who then put it into the wide open net to tie the game. The goal was his 4th of the playoffs.

Just under six minutes to go in the period and it was Barrie striking once again. After a great defensive play at one end by Joey Keane, they went down the other end and he made a great play to setup up Magwood on a partial break as he slid home his 2nd of the game for Barrie’s first lead of the hockey game 3-2.

Early in the third period the Colts were looking for blood. They would find it as they forced a turnover inside the Steelehads blueline and it came to the stick of Andrei Svechnikov who would snap home his 1st goal of the playoffs to give Barrie the 4-2 lead.

After Barrie took three penalties in a row putting them two men short, the no clock created an issue. Colts weren’t phased as Svechnikov would put another one home to make it 5-2.

Moments later on a Barrie powerplay it was Dmitry Sokolov hammering one home to make it 6-2.

Sokolov and Luke Bignell would add others one for the 8-2 victory.

Barrie wins the series 4-2 and will take on the Kingston Frontenacs in the second round of the playoffs. No official schedule release, but keep an eye out for the schedule in the coming days. Barrie will begin the series with the first two games at home.