Colts Cap Off 2016-17 Season with Strong Effort Against Kingston 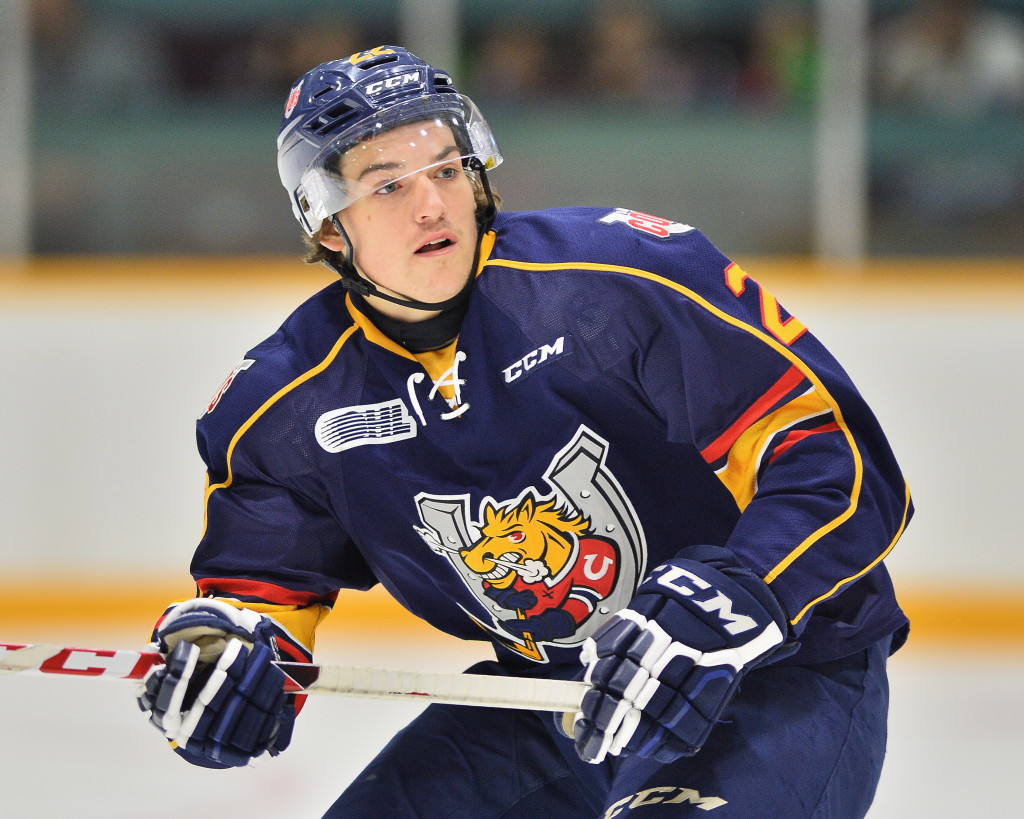 The Barrie Colts would skate hard right to the end but the Kingston Frontenacs would score four third period goals lead by Jason Robertson to snag victory away from the Colts in their season finale.

The Colts would come out strong in their final game of the 2016-17 campaign, but a late surge in the third to overcome a three goal deficit would be cut short as Kingston would add two insurance markers late and skate to a 6-3 victory.

The Colts lads were looking great donning their Irish green jerseys for the annual St. Patrick’s Day game and hoping the luck would be on their side, as they would look to finish the season on a high note.

Barrie’s two over ager’s Roy Radke and Anthony Stefano would be honoured before the game by Colts President and Owner Howie Campbell who would present the boys with their framed Colts jerseys and thank them for their years as Barrie Colts. The two would start together on a line in their final OHL game.

Radke would pick up a loose puck from Zach Magwood in the slot. After putting the shot on Frontenacs goalie Jeremy Helvig the puck would somehow bounce over the line through a goalmouth scramble for Radke’s 23rd goal of the season to give the Colts the early lead.

With just over five minutes remaining in the opening frame the Frontenacs would get the equalizer. With the Colts on the penalty kill Robertson would snap a shot from the right side. Christian Propp making his 32nd start would make the initial save with the rebound being kicked out to Stephen Desrocher who would bury it to knot things up.

After a fast pace and physical opening twenty minutes the boys would head to the locker room tied at one.

The Frontenacs would press early in the second period and strike to take the lead.

Sam Harding circling behind the Barrie goal would find Sergey Popov who fired a one timer to the back of the net passed a screened Propp to make it 2-1.

The two teams would trade chances throughout the rest of the middle period but the score would remain the same with Kingston taking the one goal lead into the final twenty minutes.

The Fronts would come out flying in the third and increase their lead to two just thirty seconds in. Linus Nyman would find Ted Nichol alone in the slot who snapped one along the ice once again passed a screened Propp.

Just three minutes later the Colts would get caught in their own zone and Kingston would add another. The duo of Nyman and Nichol would connect once again with Nyman getting the feed in front to put the deficit at three.

With Colts knowing this would be their last game of the season playing in front of the Barrie faithful a Colts powerplay would ignite the boys as the chances would start coming. Joey Keane would slide one across to Willms but would be denied twice on great saves by Helvig.

With ten minutes remaining the Colts would get one back. Aiden Brown would fire home his fourth goal of the season after receiving a pass off the stick of Giordano Finoro. Magwood would get second assist of the game.

Just thirty seconds later Barrie would keep it coming. With a little luck on their side Ben Hawerchuck would send a backhand on net that would slide under the pad of Helvig and over the line to get the boys back within one for his 15th. Stefano and Lucas Chiodo gathering assists on the play.

The Colts would keep amounting chances throwing everything on net to try and get the equalizer.

Unfortunately after a puck would bounce loose past Barrie’s defenders, Robertson would be sprung free on the breakaway and beat Propp five hole to give Kingston the insurance marker.

Barrie would pull the goalie late throwing Radke and Stefano on the ice one last time but the Frontenacs would add an empty netter to seal it in the finale and take the victory 6-3.

After missing the playoffs for just the second time in the club’s history the Colts now look to the future as Barrie clinched the first overall pick in the upcoming OHL Priority Selection Entry Draft. As well Barrie will be selecting first overall in the CHL import draft and has gained the number one pick in the OHL’s first major midget draft.