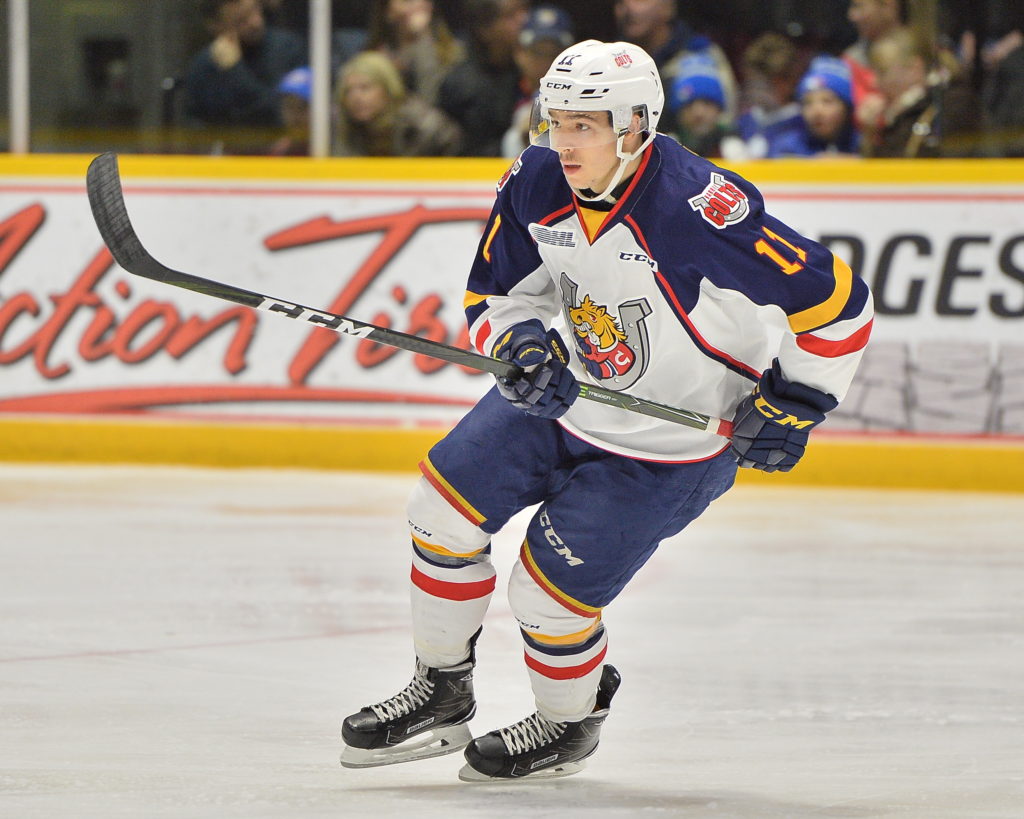 The Barrie Colts let another one slip away Thursday night at the BMC suffering a 7-5 loss.

Barrie would play a great first half of this game but the Mississauga Steelheads would erase three goal deficits twice and score five unanswered goals to continue their four game winning streak to hold on to top spot in the Eastern Conference standings.

What would normally have been a harmless dump in from centre ice would be the nail in the coffin for the Colts. With seven minutes remaining in the third period, Ryan McLeod would send the puck in from centre. The puck coming off the end boards slipping between David Ovsjannikov’s right skate and the goal post to cross the goal line to crush the hopes of the Barrie faithful.

Barrie, hosting the division leading Steelheads would meet for the fourth time this season. Barrie so far had won two of three games this season against its division rivals and would see a great opportunity to end their losing skid

The Colts entered the weekend on a season-high eight-game losing skid and facing a Steelheads team appearing to finally live up to its favourite status in the Eastern Conference.

Barrie would get out to one of their best opening period in weeks.

At 8:18 the Colts would begin the scoring. Joey Keane would fire a shot towards the Steelheads net. A lucky deflection would send the puck off the glass and bounce right to Ben Hawerchuck, being there on the doorstep to fire home his 16h of the year. Lucas Chiodo would also pick up an assist on the first goal of the game.

Both teams would take penalties with four minutes remaining in the opening frame leading to some four on four hockey. With the Colts battling in the Steelheads zone, Lucas Chiodo would pick the pocket of Steelheads defenseman Stefan Leblanc, and roof a beautiful shot over the glove of Matthew Mancina for his 17th on the campaign to put the Colts up by 2.

Throughout much of the first period the Colts would count on the great play of Ovsjannikov. With just under two minutes remaining in the first period, The Steelheads top line would break into the Barrie zone executing a perfect give and go passing play but would finish with Ovsjannikov making a highlight reel right leg pad save to keep the fish scoreless in period number one.

Early in the second period the Colts would continue their attack. Giordano Finoro playing in his 100th career OHL game would grab the puck along the side wall and feed Jason Smith back door for his 5th of the season.

That would be the end of Mancina’s night, as Jacob Ingham would take over and bring his team to life.

The Steelheads would eventually cash in on a break down in the Colts zone. Midway through the second period Aiden McFarland would send a shot from the point on net. Ovsjannikov would make the initial save, but Jacob Cascagnette would be left alone in front to bury the rebound to make it 3-1.

Barrie would keep up their offensive output. With just over three minutes remaining in the second, Zach Magwood breaking into the Steelheads zone, would feed Finoro in the slot firing home his 11th to give their three goal margin back.

Forty seconds later the ice would shift the current completely for the Fish. The Colts would give up five unanswered goal. First coming off the stick of Owen Tippett. The high profile NHL draft eligible player would join in on the action for his 39th goal of the season to cut the lead to 4-2.

Barrie would see one lucky bounce of their own as Tom Hedberg would get his 4th of the season coming on a shot in from the point that deflected off a Steelheads skate, but that would be as close as the Colts would get back.

Next up the Colts head down to Niagara to take on the Icedogs Friday night at 7pm and will return home to host the Peterborough Petes Saturday night for a 7:30pm puck drop.