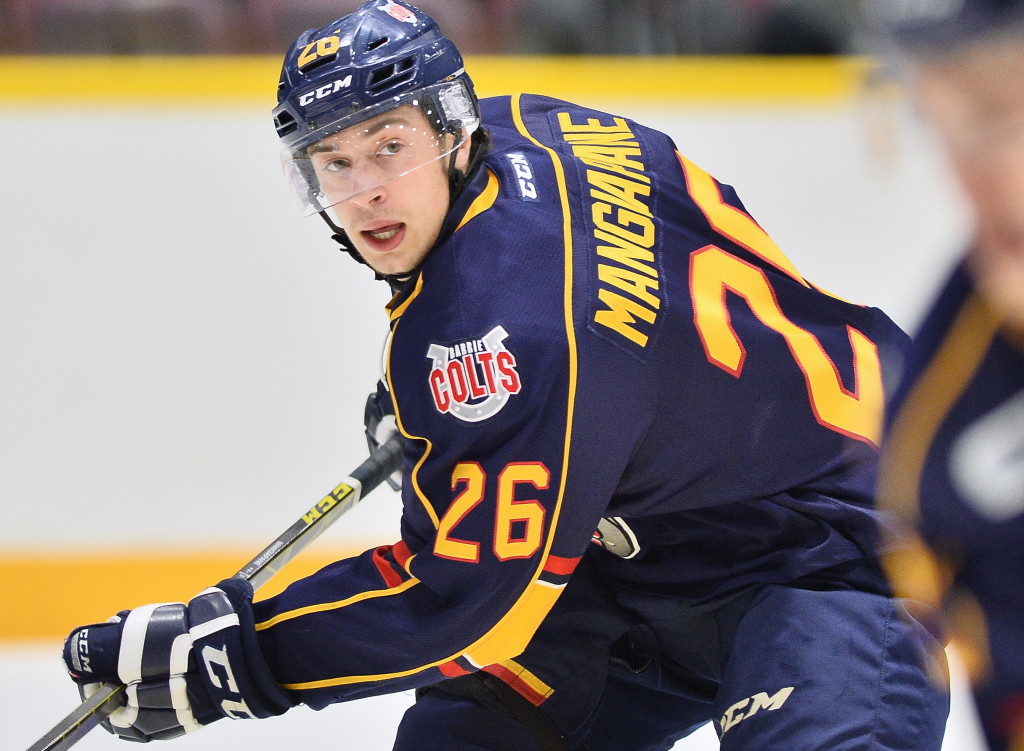 Andrew Mangiapane scored two goals, including the game winner, while David Ovsjannikov made 30 saves, recording his first career OHL playoff shutout as the Colts took Game 5 by a final of 3-0 over the Mississauga Steelheads to take a 3-2 series lead.

Following Thursday night’s thrilling overtime victory where Justin Scott registered 4 goals, including the overtime winner, the Colts looked to carry that momentum into tonight’s game. David Ovsjannikov was between the pipes for the second straight game as Mackenzie Blackwood continued to sit out with an injury that he suffered in Game 3.

Ovsjannikov would be put to the test early as minutes into the game, Everett Clark found his way behind the Colts’ defence for a breakaway but was denied as Ovsjannikov closed the legs as Clark tried to sneak one five-hole to keep the game scoreless.

With 2:51 left in the first, the Colts struck first as Andrew Mangiapane fired one over the glove of Jack Flinn for his second of the postseason. Rasmus Andersson picked up the sole assist on the marker.

The second period belonged to the Colts as they controlled the majority of the period, outshooting Mississauga 11-7. Undisciplined play from the Steelheads awarded Barrie three power play’s in the second, and they capitalized on one of them. Kevin Labanc snapped a wrist shot over the right shoulder of Flinn for his third goal in three games, and Rasmus Andersson picked up his second helper of the game, while Julius Nattinen was credited with the secondary assist.

Despite being outplayed through the first forty minutes, Jack Flinn kept the Steelheads within reach as the 6’8 netminder stopped 24 of 26 Barrie shots to keep the Colts’ lead to 2-0 heading into the third.

Going into the third period, the Colts tried their best not to repeat history as they entered the period with a two-goal lead. In game 2, the Colts lead the Steelheads 3-0 before Mississauga scored six unanswered to take the game 6-3.

The Steelheads came out firing as they doubled their shot total from the first forty minutes as they peppered David Ovsjannikov with 15 shots. However, Ovsjannikov was up to the task as he shut the door on another Mississauga comeback, making 30 saves as he picked up the shutout.

The shutout was on the goaltender’s mind as the minutes were winding down but the 6’6 Czech goaltender managed to zone that out to preserve the goose egg. “Yeah a little (Thinking about the shutout). Obviously it’s in the back of your head but you try not to think about it.”

With 3:06 left, in a last ditch effort to tie the game, the Steelheads pulled Flinn for an extra attacker. That plan would backfire quickly as Mangiapane would find the empty net with 3:06 to give Barrie a three goal lead, putting the game out of reach.

“We definitely had a good game today,” said blueliner Camera Lizotte. “We hustled hard and we had the crowd behind us, they were great. We got pucks deep and played man to man hockey and that (the win) was the result.”

When asked about Game 6 in Mississauga, Lizotte stated, “We feel confident. We have the momentum and we look to carry that into tomorrow.”