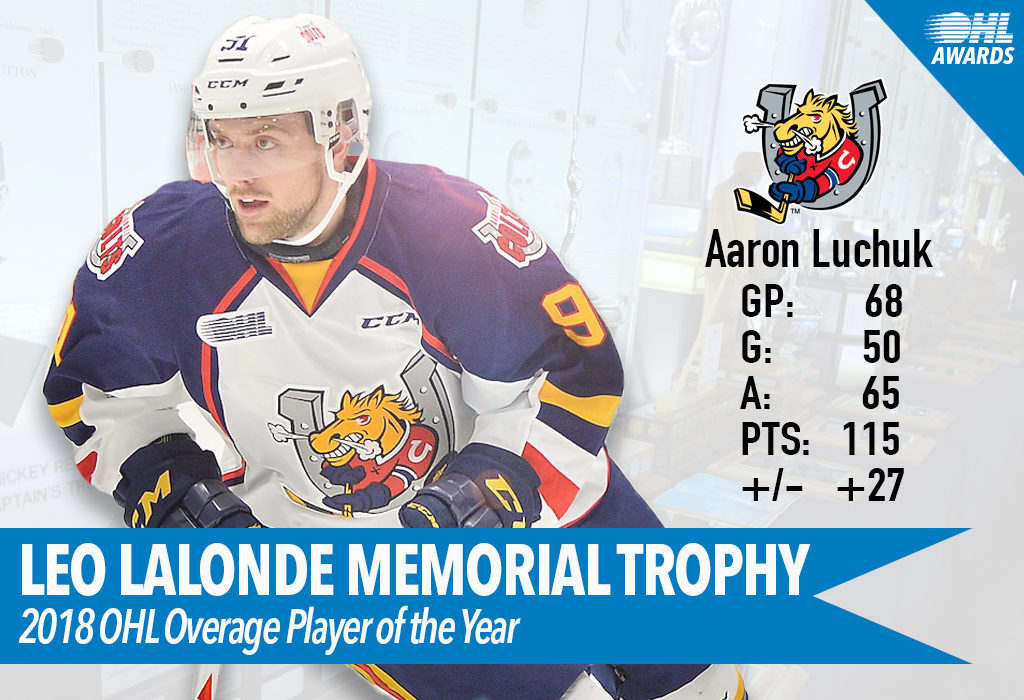 Toronto, ON – The Ontario Hockey League today announced that Ottawa Senators prospect Aaron Luchuk of the Barrie Colts is the 2017-18 recipient of the Leo Lalonde Memorial Trophy awarded annually to the OHL’s Overage Player of the Year.

Luchuk led the league in scoring with 115 points including 50 goals and 65 assists in 68 games played helping the Colts clinch their third Central Division title in four years.  He becomes the fourth Colt to win the award and fourth overage player to win both the Leo Lalonde Memorial Trophy and Eddie Powers Memorial Trophy as the league’s top scorer joining Barrie’s Kevin Labanc (2016) in that regard.

“This is a huge honour, to follow some other great Barrie Colt overagers in the past couple years,” Luchuk said. “This was an award that I set as a goal for myself at the beginning of the year and it feels good to be recognized for such a prestigious award. I couldn’t have had this kind of year without the help of my teammates from both Windsor and Barrie and coaches Dale (Hawerchuk) and Trevor (Letowski).”

A 21-year-old from Kingston, Ont., Luchuk was originally a fourth round pick by the Windsor Spitfires in the 2013 OHL Priority Selection and scored the game-winning goal in the 2017 Mastercard Memorial Cup.  Following his move to Barrie in December, the centre produced 22 goals and 42 assists for 64 points in just 38 games to reach both the 50-goal milestone and century mark for points in a season becoming the 12th Colt all-time to hit 100.  This season Luchuk delivered 35 multi-point performances and recorded the league’s second longest point-streak at 21 games behind only teammate Andrei Svechnikov’s 23-straight games.  He was voted third in the Smartest Player category of the annual Eastern Conference Coaches Poll along with third Best on Face-Offs with a 56% efficiency, and was voted Best Shootout Shooter going 2-for-2 in attempts this season.  The runner-up for the William Hanley Trophy for Most Sportsmanlike Player recorded just eight penalty minutes this season and is also a nominee for the Red Tilson Trophy for Most Outstanding Player of the Year.  Luchuk signed a free agent contract with the Senators in December and finishes his OHL career with 115 goals and 135 assists for 250 points in 274 regular season games.

“It was an honour getting to coach Aaron this year as he came over from Windsor and showed great leadership on and off the ice,” said Colts head coach Dale Hawerchuk. “He stepped into the locker room and made an immediate impact with this club. Also the fact he came in as an undrafted player and his hard work and dedication earned himself an NHL contract with the Ottawa Senators.  The Barrie Colts are extremely proud of Aaron and wish him the best of luck in his hockey career.”

The Leo Lalonde Memorial Trophy is awarded annually to the Top Overage Player of the Year as selected by OHL General Managers.  Teams were asked to submit a nominee for the award and were not permitted to vote for players from their own hockey club. Players received five points for a first place vote, three points for a second place vote and one point for a third place vote.

Luchuk received 89 of a possible 95 points in the voting process, followed by Carolina Hurricanes prospect Jeremy Helvig of the Kingston Frontenacs who received 40 points, and Pittsburgh Penguins prospect Sam Miletic of the Niagara IceDogs who finished in third place with 35 voting points.

First presented in 1984, the Leo Lalonde Memorial Trophy was donated by the trainers of the Ontario Hockey League, in memory of the late Leo Lalonde, former Chief Scout of OHL Central Scouting.  Leo Lalonde was also formerly the Chief Scout for the Belleville Bulls as well as a scout for the Peterborough Petes.

Luchuk will be formally presented with the Leo Lalonde Memorial Trophy at the 2017-18 OHL Awards Ceremony scheduled for June 6 at the Hockey Hall of Fame in Toronto.