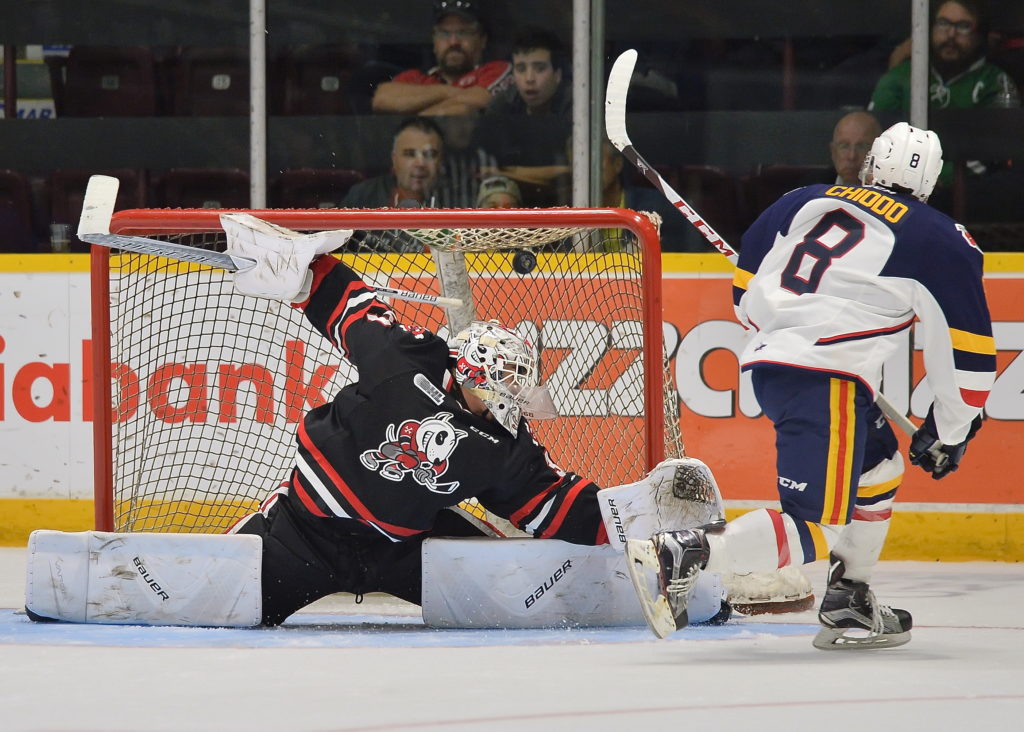 A four point night from Lucas Chiodo including two goals in under thirty seconds in the second period lead the Barrie Colts to their second win of the preseason over the Niagara Icedogs.

Coming off a 10 day break between games the Colts would get back to work for their fourth contest of the preseason and second match up with the visiting Icedogs.

After a relatively quiet start to the hockey game with neither team registering many shots at the opponents end. The Icedogs would strike with a pair of goals midway into the first by Drew Hunter and Andrew Bruder to give Niagara an early 2-0 lead.

The Colts would comeback quick. With the boys working the puck around on the powerplay Jason Willms would get a second chance in front of a wide-open cage to bury his 2nd of the preseason to pull back within one. Assists going to Nick Suzuki and Lucas Chiodo.

Barrie’s offense would come alive outshooting Niagara 11-8 at the end of 20 minutes, but Icedogs goalie Colton Incze would hold on to the 2-1 lead into the 1st intermission.

Midway into the second period it would be Barrie’s turn to strike with a pair of their own.

Andrei Svechnikov would find Chiodo, he’d dance in from the slot making a couple nice moves around the Niagara defenders before chipping one in blocker side. Kyle Heitzner would also receive an assist on the play.

Just thirty seconds later Chiodo would receive another pass up ice from Willms and break in alone finishing a beautiful backhand deke to give Barrie their first lead of the game.

The Colts would add another 10 shots on goal and hold on to a 3-2 lead after forty minutes of play.

With already one game being played between these two division rivals the intensity and tempers would begin to pick up midway through the third with the gloves coming off multiple times to settle scores.

With just over one minute to play the Colts would get some insurance. Picking up the puck in the neutral zone, Zach Magwood would break into the Niagara zone beating the defender and finishing off a beautiful back hand passed Icnze to give the Colts the final score 4-2.

The Colts will wrap up their 2017 preseason schedule with a pair of games versus the Hamilton Bulldogs beginning Saturday night at the BMC, puck drop 7:30pm, before a rematch in Stoney Creek Sunday afternoon.

Barrie kicks off their 2017-18 regular season schedule with the home opener next Thursday September 21st when they play host to the Ottawa 67’s.