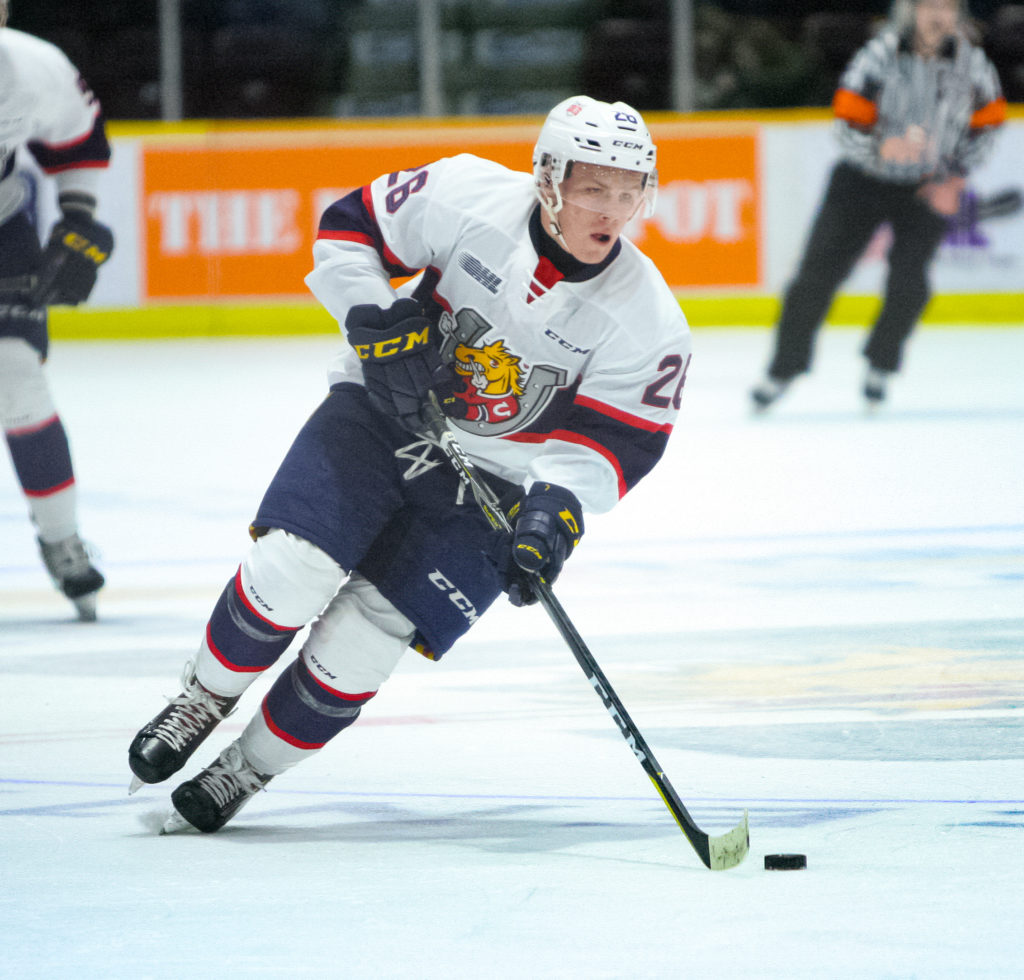 First career OHL goals from Matthew Sredl and Jake Partridge wouldn’t be enough, as the Colts would be overwhelmed by the Steelheads in a 6-3 loss on the road.

In their second game in two days, the Colts travelled south to the city to take on the Mississauga Steelheads.  The Colts would open the scoring halfway through the opening frame, as rookie defenceman Matthew Sredl would step in from the blueline and snipe his 1stcareer goal past Steelheads goaltender Jacob Ingham.  Fellow rookies Tyson Foerster and Riley Piercey would pick up assists on Sredl’s first goal.

The Colts weren’t done there as they continued to ride the momentum.  After sustaining pressure in the Steelheads’ end, it was St. Louis Blues prospect Tyler Tucker who would blast a shot past Ingham for his 12thgoal of the season to double up the lead.  This comes less than a day after he recorded four assists in a 6-3 victory over the top team in the league, the Ottawa 67s. Fellow defenceman Jack York and forward Jake Partridge would pick up their first assists of the night on Tucker’s goal.

The Steelheads would put one past Jet Greaves with three minutes remaining in the period, but the referees would immediately wave it off due to a high stick. After going to review the call, the referees would overturn their call to give the Steelheads their first goal of the game.  Aidan Prueter would get credited with the goal, William Portokalis and Ryan Barbosa would get credited with the assists.

Two minutes later the Steelheads would score to tie the game, but exactly like the first goal the referees wave it off.  Again, they would go to the review booth to check on a high stick and this time the Colts would get the decision, as they would uphold the high-sticking call. The game would remain 2-1 with just over a minute left in the 1stperiod.

A very eventful opening period wouldn’t stop there; as Ryan Suzuki got caught with a dangerous hit that called for a reaction.  Luke Bignell would answer the call and stick up for his fellow teammate, earning a big round of applause from his other teammates, but it would come at a cost, as he would be given an instigating penalty for initiating the fight.

The second period would begin with the Steelheads on the power play as the Colts attempted to weather the storm.  Rookie goaltender Jet Greaves would turn aside all shots thrown at him, as he was making his fourth consecutive start.  It would take almost 10 minutes before the Steelheads would finally break through, as a passing play ended with Alan Lyszczarczyk would stand alone in the slot and fire home his 34thof the season.  Cole Schwindt and Thomas Harley would pick up assists on the goal.

The lead would be short lived, thankfully for Colts fans, as another Colt would grab his first career OHL as Jake Partridge would put home the tying goal to make it 3-3 as he was falling backwards in the slot.  Jack York was credited with his second assist of the game, and it was only fitting that Victor Hadfield would also get an assist as Partridge was the player that passed the puck to Hadfield on his first career OHL goal a week ago.

The third period would begin with the Colts killing another penalty, but this one wouldn’t last two minutes.  The Steelheads would capitalize on the man advantage for their second power play goal of the game to regain the lead thanks to a goal from Liam Ham.  Prueter would pick up his second point of the game and Lyszczarczyk would pick up his third as both were credited with assists on the goal.

After a pushback from the Colts, the Steelheads would add some insurance as Richard Whittaker would spin and shoot a shot that would find a way over the shoulder of Greaves to put the home team up 5-3.  They would also add an empty netter with a minute left in the game to put it out of reach.   Jet Greaves would turn away 38 of 43 shots that he faced in the loss.

The Colts will return home tomorrow to finish a three-in-three week as they host divisional opponent Niagara IceDogs.  Puck drop is scheduled for 7:30pm at the Barrie Molson Centre.  Tickets can still be purchased online at www.barriecolts.com, by calling at 1-888-655-9090, or in person at the Colts Store.