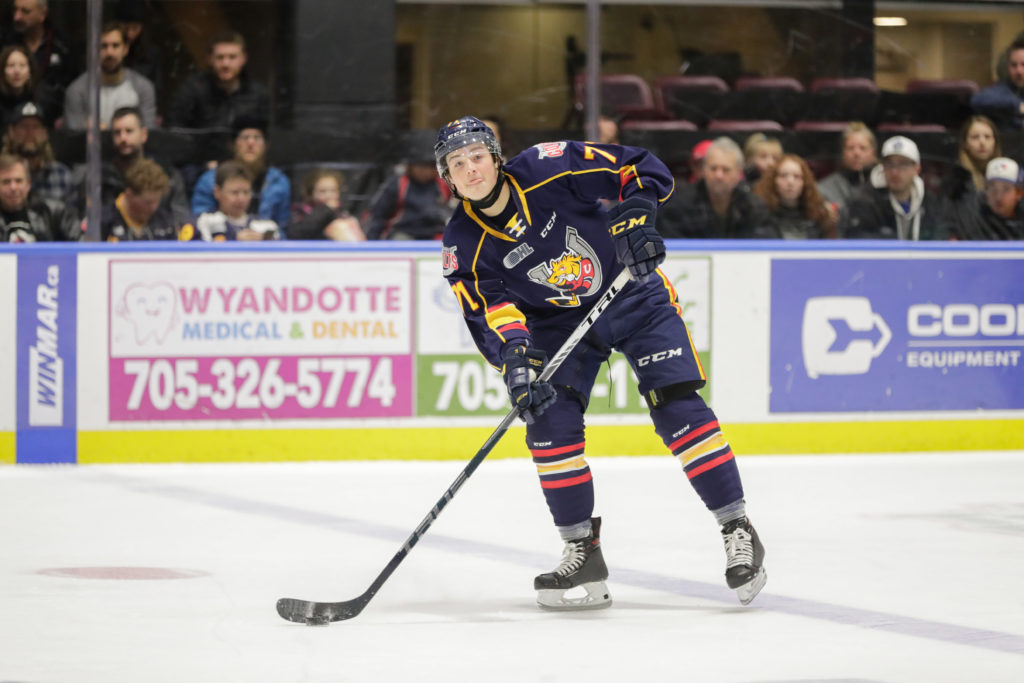 Colts rising star Tyson Foerster would continue his hot play of late scoring both goals for Barrie on the night. Celebrating his 18th birthday the Colts leading scorer would pull the boys within a goal late in the second, but a pair of third period goals by Canade in third sealed the 5-2 victory for the visiting squad.

The Barrie Colts returned to action Saturday night looking for redemption after a letting a win get away from them one night prior losing in a shootout to the Niagara Icedogs. Hosting another Central Division opponent would provide another chance to snap their recent skid.

Coming off a standout performance in his last outing, Jet Greaves would make his 22nd start of the season. Greaves would finish the night making 35 saves.

Thursday’s CHL prospect games star only needed 1:51 to break the ice on this night. Aidan Brow would spring Foerster on the breakaway beating Kai Edmonds five hole for his 22nd of the season.

With just under three minutes remaining in the opening frame the Steelheads would tie things up on the powerplay. A shot coming from the point would be tipped in front by Canade to make it 1-1.

Mississauga kept the pressure up and took the lead moments later. James Hardie stuffed a rebound behind Greaves as the visitors skated into the intermission up 2-1.

At 12:12 of the second period, the Steelheads would give themselves a two-goal cushion. Calvin Martin forced a turnover off a rebound in front of the Colts net. He buried the Steelheads third goal of the game.

Late in the middle frame the Colts would get a huge opportunity to respond. Already down a man, Liam Ham would be called for a hooking penalty giving Barrie a two-man advantage.

It was the birthday boy once again teeing it up. While on the powerplay, Brandt Clarke slid a pass back to Foerster blasting home the one timer by Kai Edmonds.

Evan Vierling would pick up an assist on the play and with seconds remaining in the period he came within inches of evening things up, but a ring off the cross bar would hold the visitors lead after forty minutes of play.

Foerster’s second of the night would put him in a tie for the league lead in powerplay goals at 11.

Into the third and just minutes past the midway point of the period Canade banged in his second of the night to put Mississauga back ahead by two.

Barrie would pull the goalie with two minutes remaining, but it would be to no avail as Canade buried his third into the empty cage giving Mississauga the 5-2 win.