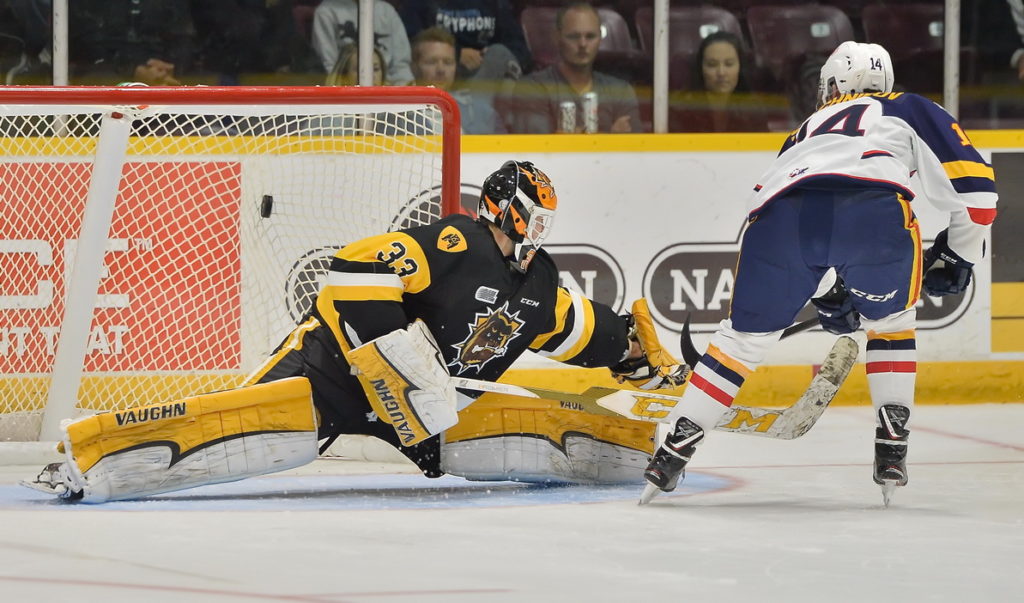 The Hamilton Bulldogs Will Bitten put a dagger in the Colts with the shootout winner, snapping Barrie’s winning streak in a 2-1 victory.

It was the third game in three nights for the Colts. After picking up victories against the Soo Greyhounds and the Sudbury Wolves, Barrie was looking to complete the sweep in front of the home crowd Saturday night.

The first period was a bit back and forth to begin with, but it was the good guys the first to pounce. Barrie put pressure on the Hamilton defence before stealing the puck. He then found streaking winger Andrei Svechnikov who blew by his man and put an absolutely beautiful shot upstairs on Kaden Fulcher to open the scoring. Joey Keane would grab the other assist.

Into the second period Barrie controlled most of the first few minutes but it was Hamilton with the best chance early. On a break the Bulldogs were sprung in all alone but Christian Propp who was making his second start of the season came up with an incredible glove save.

Just past the midway point of the game the Bulldogs would finally get on past Propp. Matthew Strome was the beneficiary of some hustle by the Bulldogs to beat out an icing before being fed the puck all alone and making no mistake to tie the game.

In the third the Colts found themselves shorthanded again and just like a night ago Zach Magwood would create an opportunity. Forcing a turnover at the Colts blueline he chipped it past the defenseman and went on a break but was stopped by Fulcher keeping the game tied.

Barrie’s hard work would be rewarded late in the third as they drew a penalty to get them on a man advantage. Within the first minute Alexey Lipanov was set up perfectly but fired it just over the wide open net as the score remained tied.

The game would stay that way all the way into overtime. Big chances at both ends nearly ended the game for both teams but both Fulcher and Propp stood on their heads to keep it tied and send it to the shootout.

The Colts are back in action next Thursday as they host the North Bay Battalion, the only team to have beaten them in regulation thus far this season. 7:30pm puck drop at the BMC.