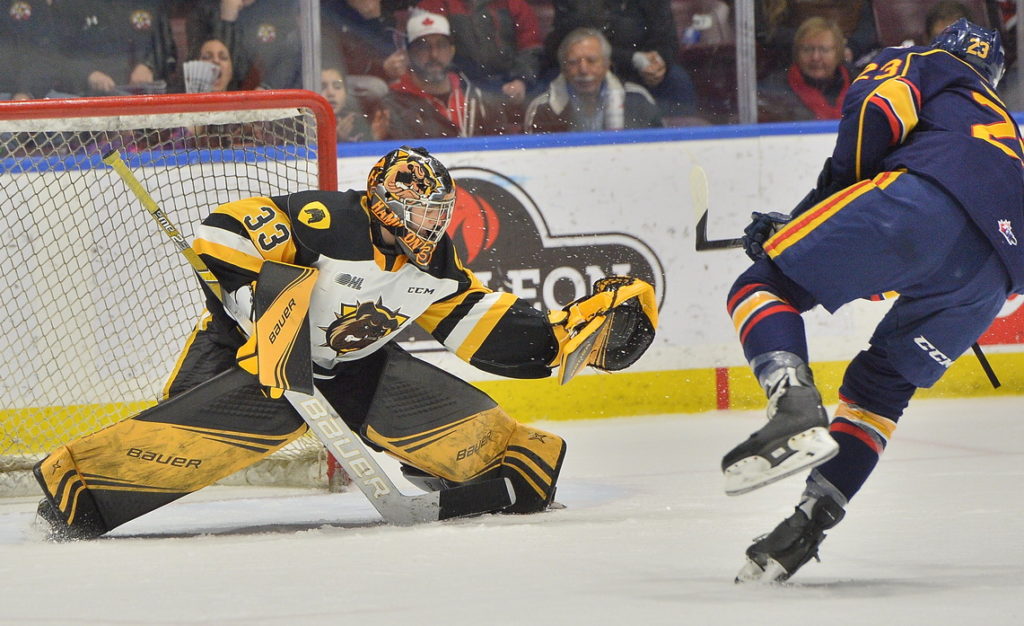 After a wild shootout in regulation Aidan Brown closed things out burying the overtime winner to give Barrie an 8-7 victory over the Hamilton Bulldogs on Bryan Little’s jersey retirement night.

Just when it looked like the victory might slip away, Brown came up big. After the Colts let a 6-0 lead vanish, the boys recovered to take the two points.

The early deficit never phased the Hamilton Bulldogs. After clawing back with a trio of goals to start the second, a lengthy powerplay opened the door and eventually to the crowds disbelief, the game was tied at seven apiece.

Prior to puck drop the Colts honoured former captain and all time leading scorer Bryan Little by sending his number 18 to the rafters. Little racked up 342 points including 153 goals and 189 assists over 247 regular season games in a Colts uniform from 2003-2007 before embarking on a lengthy NHL career that has been spent entirely with the Atlanta Thrashers/Winnipeg Jets organization.

Little reminded the players of the pride in wearing the Colts sweater in his speech, his words of wisdom for the young Colts squad must have inspired the boys as they came out flying, most notably four goals by Ethan Cardwell in the opening twenty minutes.

After watching Little’s jersey raised to the rafters you had to wonder if Cardwell envisioned dreams of his own jersey going up one day.

Just 35 seconds into the night, Cardwell would beat Zachary Roy on the first shot of the game. Brandt Clarke and Nathan Allensen picked up their first points of the night assisting the play.

As the midway point of the first past, Clarke lead the rush up ice beating the defender to the goal before sending it back out front for Cardwell to clean up his second of the night.

Two minutes later Nicholas Porco jumped into the action on a great individual effort. He rifled his 8th of the year over the shoulder of Roy making it 3-0.

The Colts wouldn’t let up already on the powerplay and with a delayed penalty call on the way, Nathan Allensen blasted his 7th of the year from the point by and just 0ne minute later Cardwell would force a turnover at the Bulldogs blueline walk in and rip it by Marco Constantini to make the hats fly for his third of the night.

Cardwell added his fourth just thirty seconds later as the Colts went into the room with a dominating 6-0 lead after one period.

A bit more normal start to the second period would see the play settle in. The Colts would draw a four-minute powerplay just over three minutes into the period, but it was the Bulldogs striking back while shorthanded. Jan Mysek would steal it at the Colts blueline and skate in to beat Jet Greaves five hole.

Nearing the midway point of the period Navrin Mutter let a knuckler go from the right side that fooled Greaves to get Hamilton within four of the lead.

The Dogs weren’t done yet and at 12:27, George Diaco would feed Ryan Winterton out front to bang home their third straight to claw back within three.

With just under a minute remaining in the second and the Colts on a lengthy penalty kill the two teams would trade two more goals rounding things out. First Josh Nelson would bury his 6th off a great feed from Victor Hadfield, but with just 24 seconds left on the clock Diaco tapped in another on the doorstep to make it 7-4.

Into the third and Hamilton still on the powerplay Mysak and Winterton would add two more to get within one, and at the 7:07 mark, Logan Morrison tipped a point shot to complete the comeback knotting the game at seven goals aside.

Neither team could get the final go ahead marker over the last thirteen minutes of play and the already late game would extend into extra time to find a winner.

In overtime Victor Hadfield stole the puck at the Colts blueline and sent Aidan Brown in alone beating Constantini with a snap shot low. His 10th of the year sent the home crowd to their feet in what was an emotional night from start to finish inside Colts Centre.

The Colts will complete a busy weekend tomorrow night as they travel to Oshawa for a rematch with the Generals. Puck drop scheduled for 6:05pm at the Tribute Communities Centre.