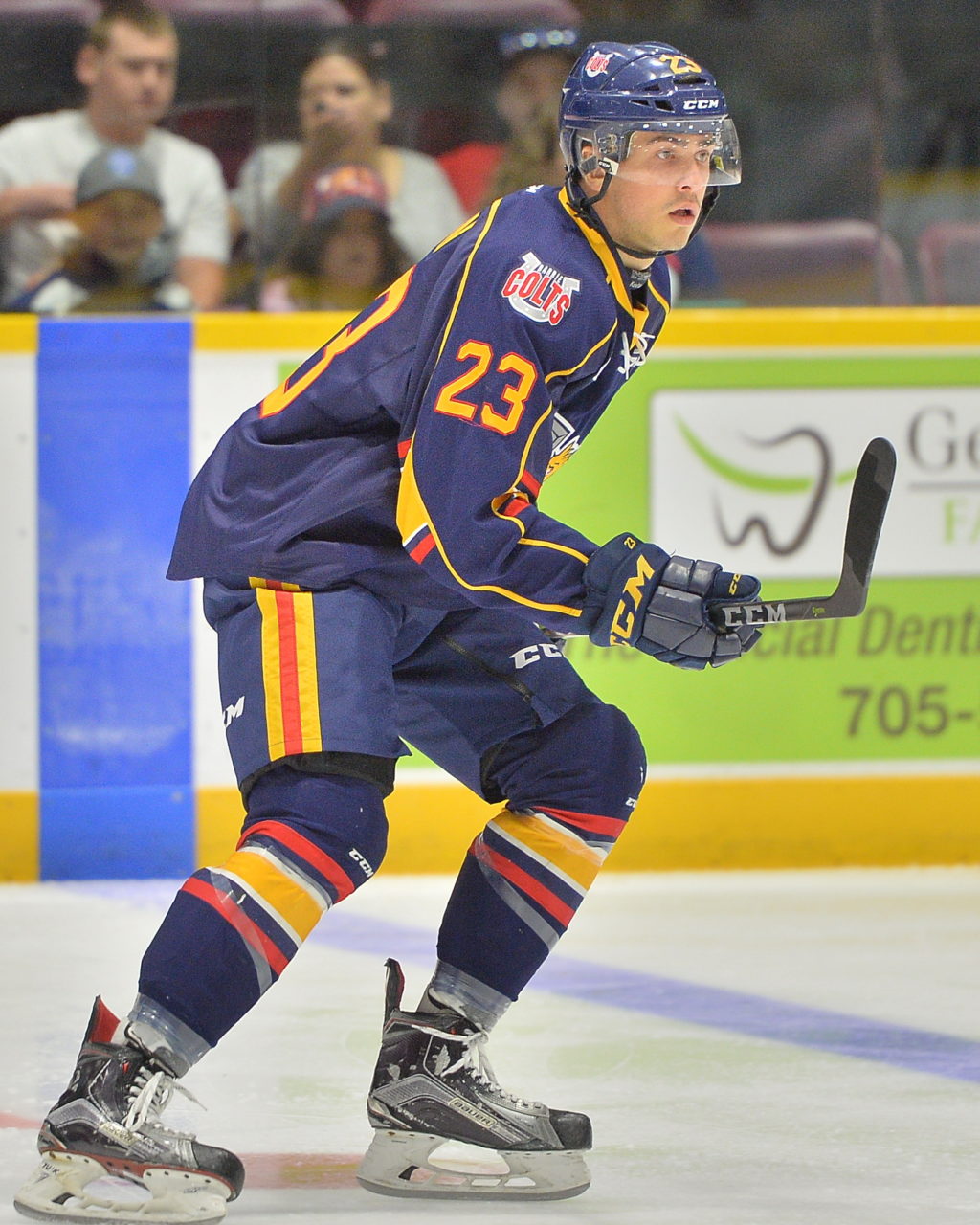 In what looked like a game the Barrie Colts were going to skate to an easy win the Guelph Storm came thundering back scoring three goals in a three minute span late in the third period, but a great individual effort by Aidan Brown would see him hammer home the game winner to escape with the 5-3 victory.

The Colts looking to snap a two game losing skid coming into Saturday nights contest versus the Guelph Storm would make it rain early.

Colts fans wouldn’t have to wait long, as just over two minutes in Lucas Chiodo would find Zach Magwood cutting through the middle. Using the Guelph defender as a screen Magwood fired a laser top corner over the glove of Nico Daws for his 21st of the season giving Barrie the early lead.

The Colts would keep the pressure coming in the Storm’s end. After the puck was knocked loose from Guelph trying to clear the zone by Nathan Allenson, Jaden Peca would slide a pass to Brown who hammered a one timer under the bar for his 4th goal of the season increasing the Colts lead to two.

The two teams would trade chances throughout the remainder of the first and much of the second period staying even on the shot clock.

With just over four minutes remaining in the middle frame the Colts would get a huge opportunity to squander the Storm going on a five minute powerplay. Guelph would take another penalty late in the period to further the advantage for the Colts but Daws would shut down any chance to increase the lead.

Nearing the midway point of the third period, the Colts would go to work once again with the advantage and this time make it count.

Andrei Svechnikov coming off the boards would find Aaron Luchuk in the slot to one time the pass. Daws would make the low pad save, but Chiodo would be right on the doorstep to bang in his 23rd to make it 3-0.

The assists would continue the point streaks for Luchuk (17 games) and Svechnikov (14 games).

With just over six minutes remaining in the third, the Storm would answer with a pair of goals just seconds apart.

First on their 29th shot of the game while on the powerplay, Dmitri Samorukov would step into one from the slot beating Lazarev to the blocker side.

The attack would quickly return to the Barrie zone off the next face off and it would be Liam Hawel banging in a rebound to make it a one-goal game.

The Storm weren’t done there. With just over four minutes remaining in regulation Barret Kirwin would find space in the right circle and snap one by Lazarev to make it a tie game.

Moments later the Colts would respond right back. Brown with one hand on his stick would chip the puck past a defender over the Guelph blueline and blast one over the shoulder of Daws to put the boys back in front with just over three minutes left in the game.

The Storm would pull Daws with just over a minute left, but the Colts would prevail and Dmitry Sokolov would add to his goal total firing his 41st of the year into the empty net to make it 5-3.

The Colts will travel to Owen Sound tomorrow for another meeting with their Highway 26 rivals facing off in a  2pm matinee.