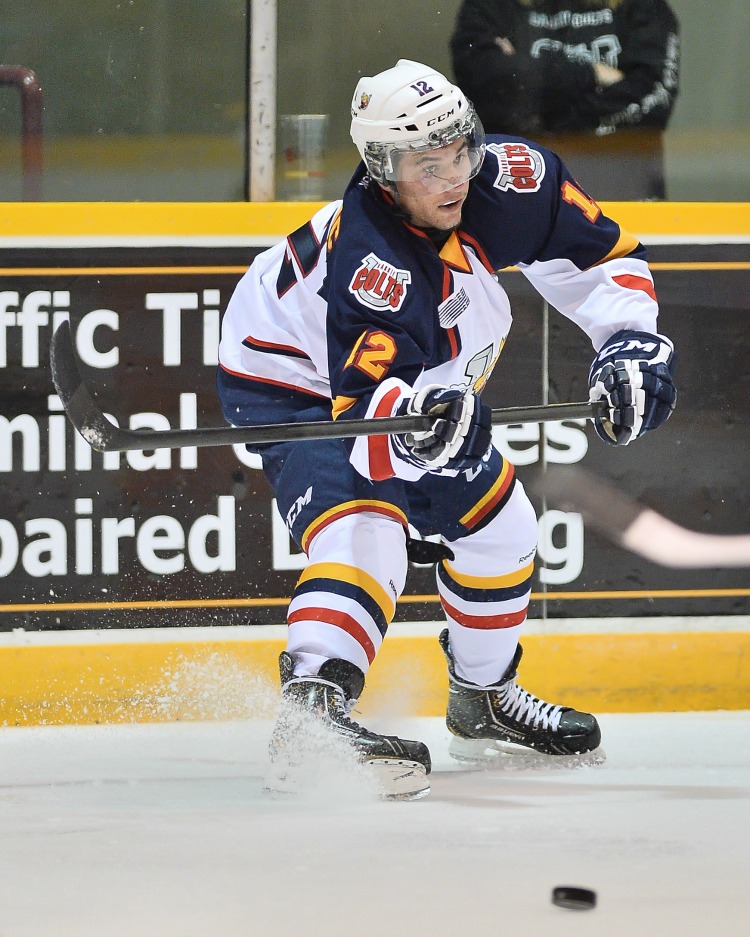 The Barrie Colts hosted the visiting Oshawa Generals on Thursday night, playing each other for the first time since last year’s semi-final playoff series. It was a tight checking hockey game and came right down to the wire, as Oshawa took home the 2-1 victory.

The Colts got off to a good start and capitalized early as rookie forward Kevin Labanc scored his first career OHL goal just over six minutes into the contest.  Labanc was left all alone in the slot before he went top shelf with a hard wrist shot, beating the glove hand of goaltender Daniel Altshuller.

Colts’ rookie Cordell James picked up an assist on the play for his first career OHL point.

Late in the first period Oshawa would score on the power play to equalize the game at 1-1.  Generals’ Cole Cassels redirected a pass from teammate Josh Sterk as the puck just squeaked through the legs of Mackenzie Blackwood and crossed the goal line. Michael Dal Colle also registered an assist.

After a strong opening period for both teams Oshawa held the edge in shots 10-8.

The defensive battle continued in the second period despite multiple minor penalties being handed out to either side.

Oshawa held Barrie in their own zone for a lengthy period of time, but Mackenzie Blackwood was the teams best penalty killer and kept this game tied at one a piece.

The Generals outshot the Colts in the second frame 11-5.

The tension picked up in the final frame as the Colts’ looked to re-take the lead. Just over the midway mark of the third period Barrie had a 5 on 3 man advantage but were unable to capitalize.

Off a neutral zone face-off, Philadelphia Flyers prospect Scott Laughton found himself on a short handed breakaway. Laughton made a nice move to his backhand before tucking it through the legs of Blackwood to put the Generals ahead 2-1.

Barrie’s best opportunity to tie the game came late when forward Mitchell Theoret was awarded a penalty shot with just thirteen seconds remaining in the game. Theoret, who leads the Colts in scoring, let a nice snap shot go that beat goaltender Daniel Altshuller but rang off the post and stayed out.

Barrie controlled the play in the final twenty minutes but fell short by a final score of 2-1.  Goaltending was strong at either end as Mackenzie Blackwood made 24 saves in his second OHL start.

The home-and-home series between these two clubs will continue on Friday night, as the Colts will face the Generals at the General Motors Place in Oshawa. Game time is 7:35.