Barrie Lets One Slip Away Against Sudbury; Losing 6-4 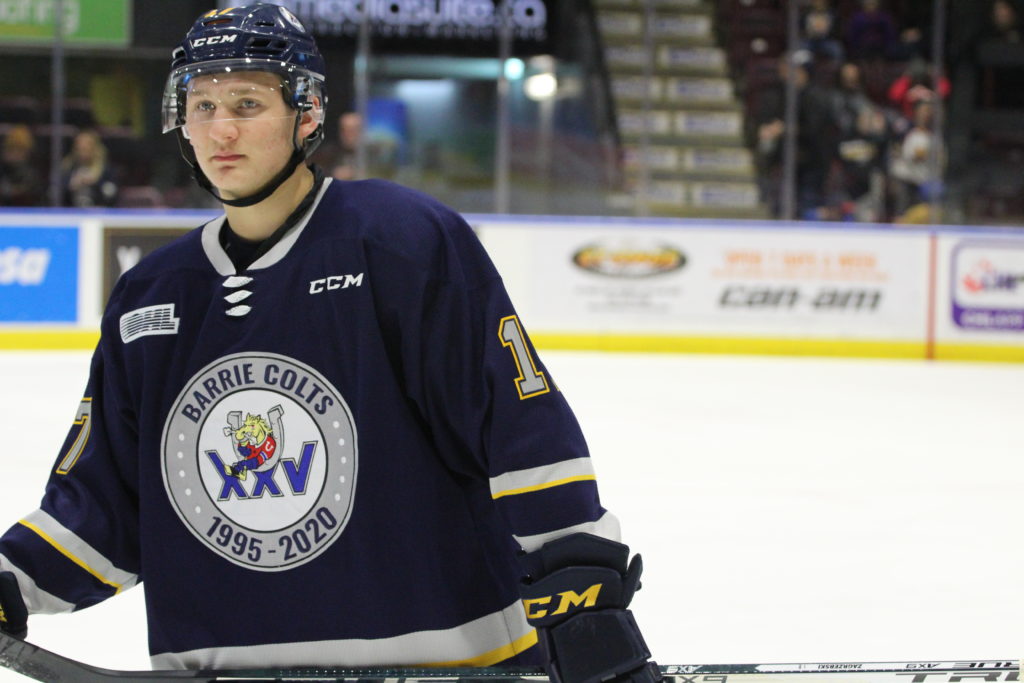 The Barrie Colts let a first period 3-0 lead slip away, thanks to a hat-trick from Matej Pekar in the Sudbury Wolves 6-4 win on Saturday night at Colts Centre.

A game that felt huge in the eyes of Colts fans, sitting just 2 points behind the Wolves even though the season series was heavily in favour of the visiting Wolves to this point.

It was a quick start for the home team as just 46 seconds into the game, Evan Vierling extended his ten game point streak by sliding home the opening marker.  Colts Captain, Luke Bignell fed him in front before he potted home his 8th of the season.  Tyson Foerster also collected an assist, extending his point streak to ten games.

Following the goal, it was Sudbury who peppered Jet Greaves with 7 straight shots, but then a costly penalty for the Wolves put the Colts on the PP.

Midway through the period the Wolves would have their chance to strike.  The Colts gave up the puck on the offensive blue line which lead to a breakaway the other way, but Greaves stood tall keeping the score at 2-0.

Barrie would make them pay, Colts leading goal scorer, Foerster one-timed home his 30th of the season.  Brandt Clarke and Vierling assisted on the goal to make it 2-0.

The hot first period continued for Barrie as Aidan Brown stole the puck at the Sudbury blueline and went in on a two on none with Josh Nelson.  Brown fed it over and into the back of the net it went for Nelson’s 9th of the season, giving Barrie the 3-0 lead.

Shortly after Sudbury would get something past Greaves.  Former Colt, Matej Pekar went in on a breakaway and snapped it home to cut the lead to 3-1.

Before the horn could sound the Wolves scored another to make it 3-2 after a wild twenty minutes at the Colts Centre.

The second period started with more of the same.  After an early double minor for high sticking, the Wolves completed the comeback scoring just minutes in to tie the game at three.

Nothing doing again until just under a minute to play in the second when Pekar put home his second of the game, giving the Wolves their first lead of the hockey game 4-3.

Early in the third it was an unsuspected customer who tickled the twine.  Chris Cameron let a harmless wrister go from the point that found its way in to tie the game at four.  Ethan Cardwell and Nelson assisted on his 2nd of the season.

At the end of a Sudbury powerplay late in the third it was the Wolves restoring their one goal lead as Kosta Manikis tipped it in from the point for the 5-4 lead.

Barrie would fight hard to try an get the tying goal but Pekar would complete the hat-trick on the empty net to secure the 6-4 victory.

That ends the weekend for the Colts as they head on the road next week to Erie and Niagara before coming back home to host North Bay next Saturday.