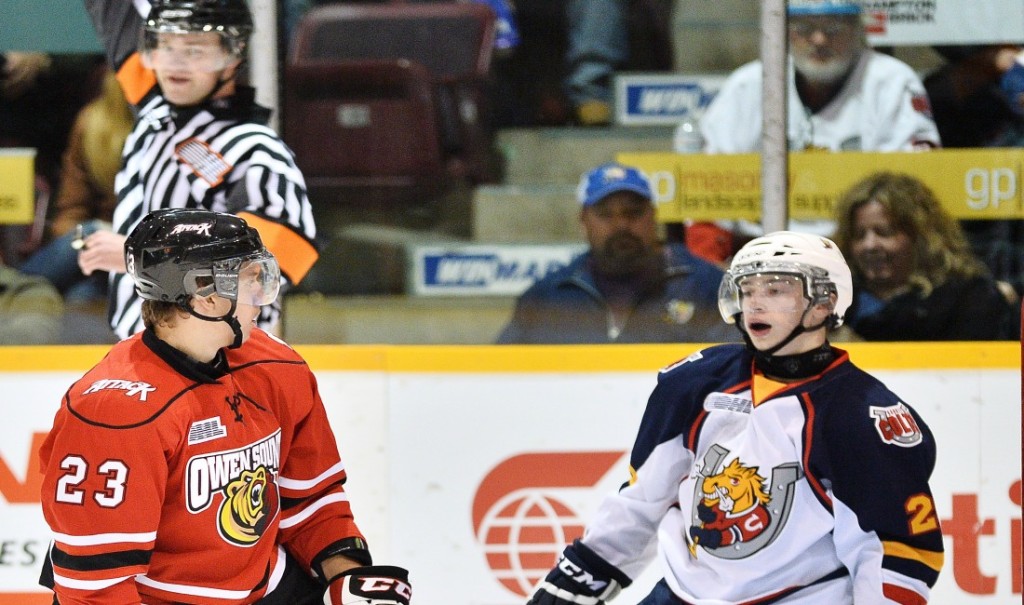 On a rare Wednesday night the Barrie Colts took to the ice to face the Owen Sound Attack at Harry Lumley Bayshore Community Centre. The conference rivals exchanged numerous leads but it was the Attack who prevailed in the end to the 5-3 victory.

Former Attack defenceman Jake Dotchin opened the scoring to give the Colts the early lead at 4:54 of the first period. Erik Bradford broke down the wing and ripped a shot off the post where Jake Dotchin would then follow up on the play to pot home the rebound. Kevin Labanc also picked up an assist.

Owen Sound would respond with a power play goal midway through the frame, as Kyle Hope buried a rebound for his second goal of the season.

The Colts held a 15-9 shot advantage after twenty minutes.

The second period saw both teams exchange power play markers in the first ten minutes. First at 5:38 Thomas Schemitsch put the Attack ahead 2-1 with a low shot that found it’s way through netminder Mackenzie Blackwood. Zach Hall who was welcomed back to the Colts line-up would then score on the man advantage with a hard wrist shot, beating goaltender Brandon Hope low glove side.

With the puck landing on his stick as he exited the penalty box, Damir Sharipzyanov found himself on a shorthanded breakaway before snapping it top corner for his first career OHL goal.

The scoring continued at 11:57, as Erik Bradford then tied the game back up at 3-3. Bradford scored on a hard wrist shot from the slot after a nice feed through the Attack defenceman’s legs from teammate Josh MacDonald.

In the dying minutes of the second frame Owen Sound would re-take the lead 4-3 as Kurtis Gabriel put in his fifth of the season. Colts still held the edge in shots 24-19.

Attack forward Holden Cook scored the insurance marker in the third period to lift Owen Sound to the 5-3 win over the Colts.

Barrie pulled out all the stops to try and tie the game late with the goalie out, but could not get one by goalie Brandon Hope. The Colts now fall to 6-8-0-1 on the season and will look to earn two points when they head south to take on the Niagara IceDogs this Friday November 1st. Game time is 7:00.