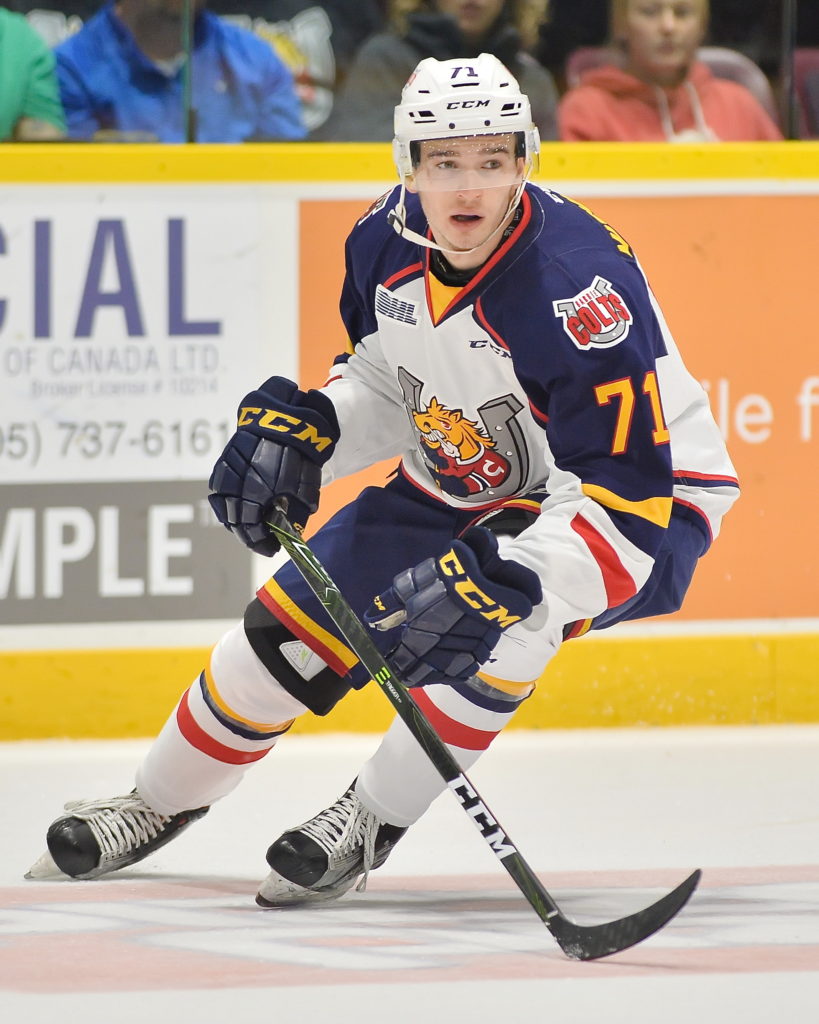 For the third time this season the Barrie Colts and Mississauga Steelheads couldn’t solve the contest in the first sixty minutes.

Just 1:15 into the overtime period it was Mississauga’s Stefan LeBlanc banging home the game winner giving the fish a 4-3 overtime victory.

The Barrie Colts were in Mississauga Friday night looking for their third victory in as many contest against the fish this season.

Early on the Steelheads hemmed the Colts in their own zone with a handful of shots going just wide of the net. Finally Barrie was able to retrieve the loose puck as Lucas Chiodo sprung down the wing and carried it into the Mississauga zone. He then fed Ben Hawerchuk down low who made one move and beat Jacob Ingham just forty-two seconds into the contest giving the boys a 1-0 lead.

Minutes later the good guys would strike again. This time it was Zach Magwood who would make the fish pay. Grabbing the puck in the neutral zone and firing one across the body of Ingham to give Barrie a two goal lead. The goal was Magwood’s 13th of the season

Seconds later though the Steelheads would strike. Ville Saarijarvi would throw one towards the Barrie net that would make it through everyone and past Ruan Badenhorst.

Not long after that Missy was looking to strike once again as they brought the puck out front a couple of times but the Tiny Township native had to be sharp on both occasions to keep the lead for Barrie.

After a while of back and forth play the Steelheads would find a way to tie it up. Owen Tippet found a puck on a tied up draw in the Barrie zone and snapped it short-side on Badenhorst to tie the game at two.

Barrie will finish up their three in three tomorrow night as they welcome back the Oshawa Generals to the Molson Centre. Puck drop will be at 7:30pm.

The game would remained tied until the 7:11 mark of the period. Barrie took two penalties within thirty seconds of each other and on the five on three power-play for the Steelheads it was Tippett once again making Barrie pay. His 36th of the season gave the fish their first lead of the game.

Nearing the midway mark of the third period Barrie would get the man advantage. They weren’t creating many opportunities, but on their first shot of the power play they were able to strike. Kirill Nizhnikov who was originally drafted by Mississauga this past Spring snapped one past Ingham to tie this one at three.

With just under five minutes to go in the third period Aidan Brown found some wiggle room as he drove to the net but was hauled down giving Barrie another power-play.

Also make sure to download the Official Barrie Colts App. It’s absolutely free on both Android and IOS devices. Earn points and turn them into your favourite Barrie Colts rewards.