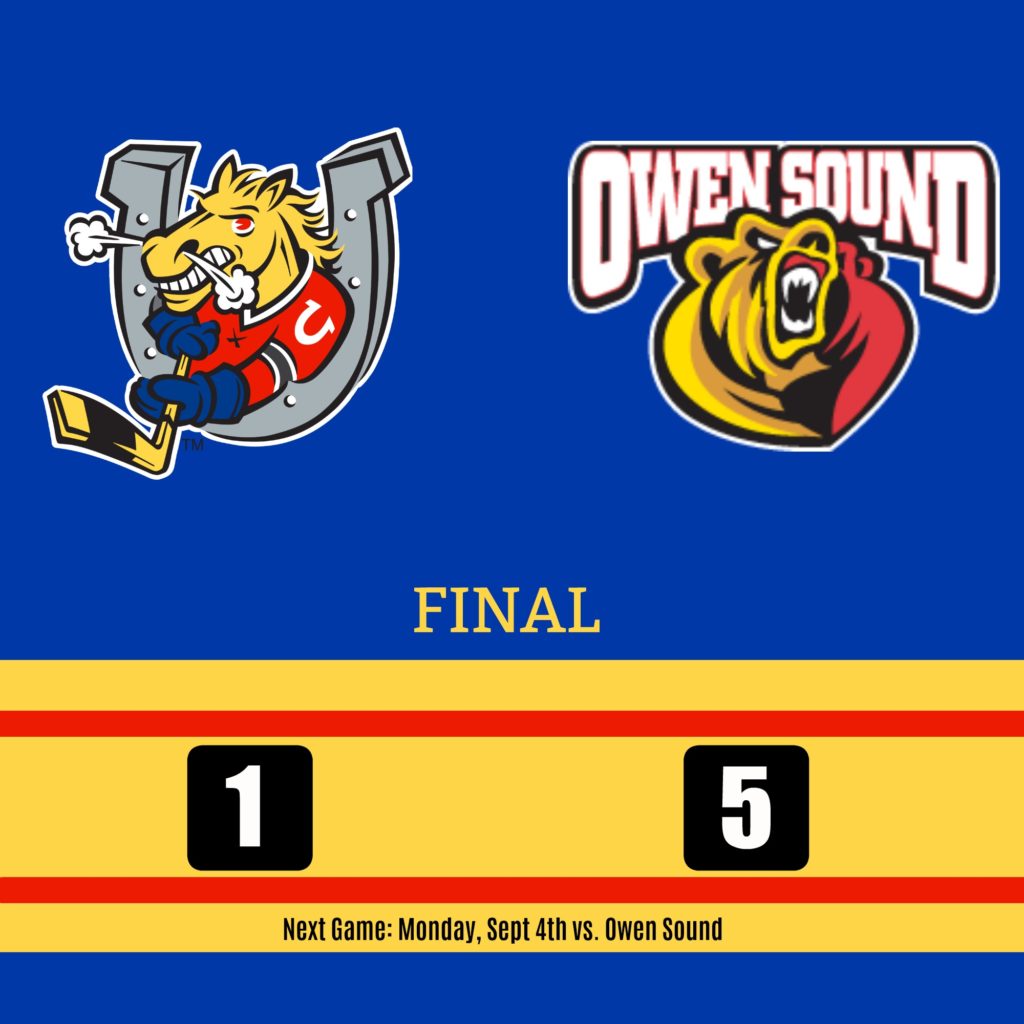 Just thirty six seconds into the second period Alany Lyszczarczyk got behind the Barrie defense and put one past Christian Propp for his second of the game, which would hold up to be the eventual game winner in a 5-1 victory.

Ironically he had scored one in the first period with just thirty-six seconds remaining, which had opened the scoring in the game.

Labour Day weekend has become an annual tradition between the Owen Sound Attack and the Barrie Colts and this Sunday only added a little bit more meaning. Not only is it already the highway 26 rivalry but the Colts selected Ryan Suzuki, first overall in the 2017 OHL priority selection draft this past summer. His brother Nick, faced off across from him for the first time in the OHL. Seeing as these two teams meet so frequently in the regular season, it only adds to the great battles between the two clubs.

The game began with the two brothers facing off against one another and a quick little stick tap before the puck was dropped.

Both teams came out flying with chances at both ends. First it was the Attack thinking they had scored after a shot from the point went off the face of Tyler Tucker as he went down before Owen Sound put the puck behind Propp. Whistle blew before the puck crossed the line.

At the other end it was Curtis Douglas being denied by Zach Bowman at the side of the goal keeping things scoreless.

Shortly after, Zach Magwood took a hooking penalty that sent the Attack on a power play and they looked like they were in mid season form. A great play help setup up Nick Suzuki in front of the net but Propp made the big stop with no rebound.

With less than three minutes remaining in the opening period Lucas Chiodo was setup beautifully by Magwood but Bowman stuck out the glove and denied him of the first goal of the game.

After grabbing the 2-0 lead, Owen Sound wouldn’t waste anytime getting another. After just missing from one side of the net, Suzuki got the puck back and setup Jacob Friend who fired one from the point and over the glove hand of Propp for the 3-0 lead.

On a Barrie power play midway through the frame, Chiodo was able to setup Magwood wide open in the slot for a one timer, but he fanned on the shot and wasn’t able to get it on goal keeping the Colts scoreless.

Once again the Attack would score quickly into the period. Just like the second period Owen Sound got behind the Barrie defense and made them pay. This time it was Matthew Struthers. He was initially stopped by Kai Edmonds, but he slipped the rebound right between his legs to make it 4-0.

Barrie would eventually break the goose egg. After forcing a turnover in the offensive zone, Ryan Suzuki took a shot from the slot that was stopped but Chiodo was right there to hop on the rebound and put it past Bowman for the tally.

The Attack’s Kevin Hancock would add one more before the final buzzer to seal the 5-1 victory.

No time to dwell on the loss this afternoon. The two teams go back at it tomorrow night in Barrie for the annual Labour Day classic at the BMC. Puck drops at 6pm and tickets are available at the box office or www.barriecolts.com

Thursday Highlights: Night of firsts in Barrie
8 hours ago