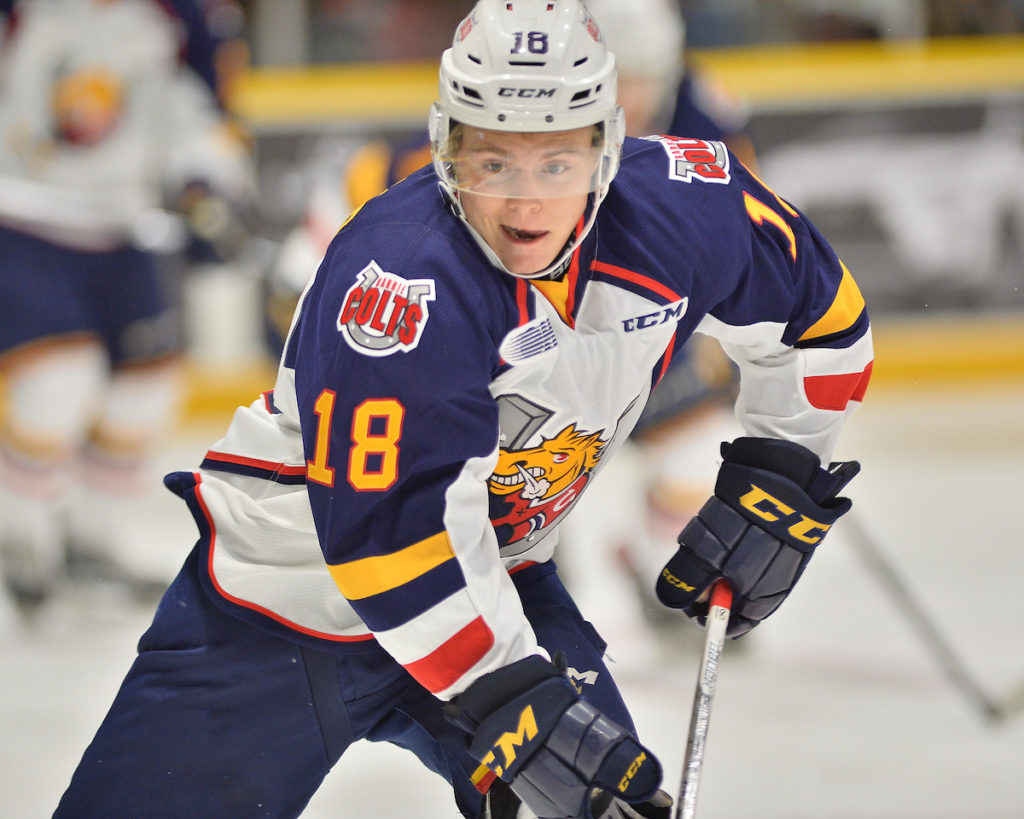 Zach Magwood strikes for two goals in a 3-1 Colts victory, along with a 37 save performance by David Ovsjannikov.

The first period saw a Flint Firebirds goal get called off just 18 seconds into the game. The puck was knocked in by a high stick and immediately waved off on the ice.

Very few chances, for Barrie in the first but they were able to capitalize.  Magwood picked up a loose puck at the Flint blue-line and just from above the circle snapped a shot on net that handcuffed Connor Hicks. The puck bounced into the air and in the back of the net for Magwoods 6th goal of the season.

The goal snapped a 2 game goalless drought for the Colts.

Just moments later it was the Firebirds pushing back. Bringing lots of pressure on David Ovsjannikov who made his first start in three games. The native of Czech Republic was sharp keeping the puck out of the net.

Early in the 2nd period Barrie had a 5 on 3 power-play for almost a full two minutes. A couple chances came from it but nothing too serious. As the penalties were expiring Kirill Nizhnikov made a pass that got past all the Barrie players and out to centre ice right onto the Firebirds Nick Camano’s stick and he was sprung in on a breakaway and snapped one home.

The goal would go to a review to see if it was offside, but a closer look ruled it was a good goal. It was Camano’s 15th goal of the season that tied the game up.

Barrie would not let that keep them down. Just minutes later they would take advantage of a bad clearing attempt by the Firebirds. Joey Keane was able to keep the puck in and find Jason Willms back door who had the yawning cage to pot his 7th of the season. Justin Murray picked up the second assist on the go ahead goal.

With less than three minutes to go in the period, Anthony Stefano picked up the puck and headed down on a two on one with Giordano Finoro who tipped it on net, but was stopped by the left pad of Hicks keeping the score at 2-1 through forty minutes of play.

Nearing the midway mark of the third period Colts rookie Defenseman Tyler Tucker was alone in the slot but couldn’t put one past Hicks for the insurance marker.

Magwood would add an empty net goal sealing the victory for Barrie.

With the win the Colts took the season series with Flint two games to nothing.

The boys are back in action tomorrow afternoon in Owen Sound to take on their highway 26 rival.