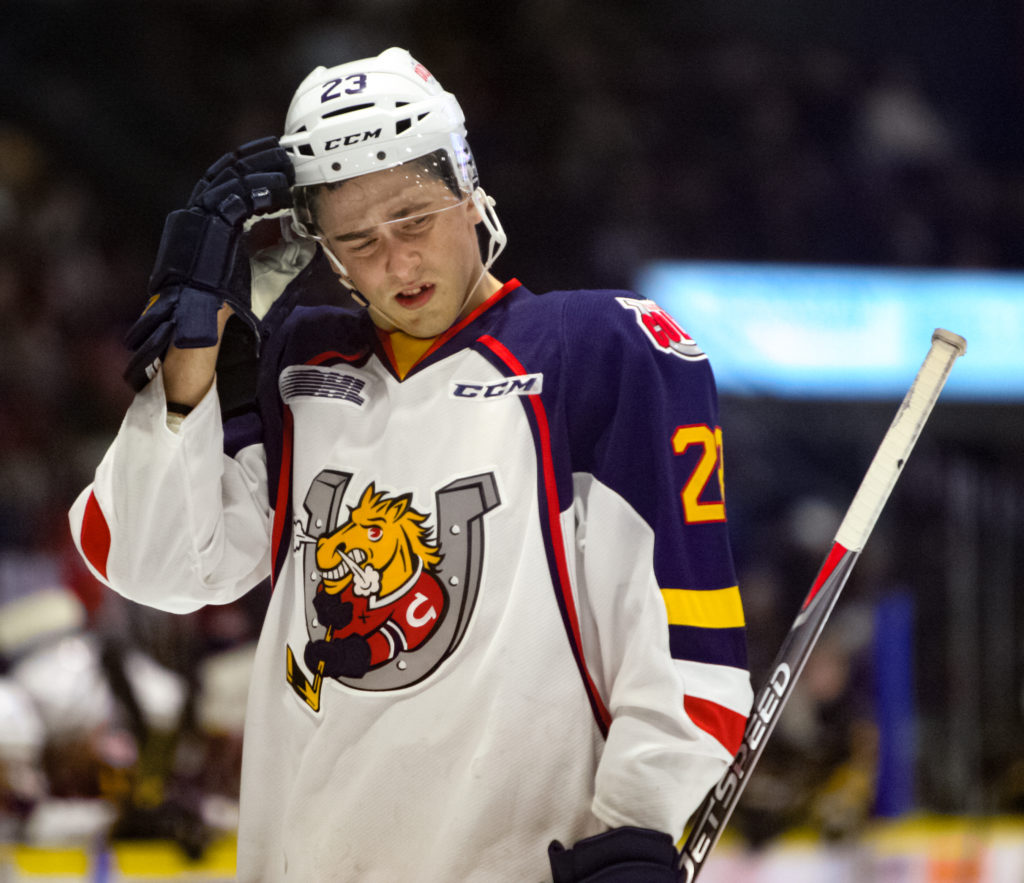 It was an offensive flurry in Hamilton on Family Day as the Bulldogs defeat the Barrie Colts 7-5 on Monday.

A rare Monday game featured the Colts and Bulldogs and was arguably Barrie’s biggest game of the season with the playoffs quickly approaching.  The Bulldogs were in 6th spot in the Eastern Conference coming in and were looking to track down Mississauga, where as the Colts were chasing the Peterborough Petes and North Bay Battalion who sit 7th and 8th in the standings.

Family day brought a full crowd to the city of Hamilton for the afternoon affair between the two clubs.  After a couple of early chances for the home club, it was the visiting Colts who would find the back of the net first.

Ben Hawerchuk drew a penalty and then quickly went to work on the man advantage.  Just 23 seconds into the power-play it was Hawerchuk lighting the lamp for his 23rd of the season.  It was a point shot from Tyler Tucker that was blocked, leaving a big rebound for the overage forward who put it home.  Ryan Suzuki was credited with the second assist.

The lead was short lived.  Hamilton in their third jerseys would work their way into the zone and force the puck to the front of the net.  The puck was deflected into the air before Issac Nurse knocked it in out of the air to tie the game.  The goal was reviewed but did stand after taking a look at it.

Later in the period with just over a minute remaining, Jan Jenik was able to pick up the loose puck that was cleared out of the Hamilton zone.  On a one on one he went one way and fired the other way, beating Jet Greaves to give Hamilton their first lead of the game at 2-1.

Barrie knew a quick start was crucial in the 2nd period after the late Hamilton goal in the first period, and they got just that.  Just 26 seconds into the period, Hawerchuk stole the puck in the Bulldogs zone and slid it between the legs of Zach Roy to tie the game and score his 2nd goal of the game.

Later on, with Hamilton on the power play, it was Barrie who would get the go ahead goal.  Ryan Suzuki forced the Bulldogs goaltender to give up the puck quickly, which allowed Riley Piercey to grab the puck at the blue line and move in on a two on one with Suzuki.  He fed the puck across and Suzuki put it home for the 3-2 lead.  The goal was his 19th of the season.

Just moments later the home club would reply.  A slap shot through a screen by Jake Gravelle found the back of the net, tying things at three.

The wild game continued with even more goals.  2019 NHL top prospect, Arthur Kaliyev tipped in a Kade Landry pass to put the Bulldogs up 4-3.

The scoring would not stop there.  Near the end of the second period on a Barrie power play they tied the game up once again.  Tyler Tucker absolutely ripped one from the blue line in for his 9th goal of the season to tie the game at 4.  Suzuki and Hawerchuk were credited with assists.

Once again, Barrie would relinquish the lead.  Liam Van Loon came down the wing and fanned on a shot that beat Greaves to make it 5-4.  That goal would signal the end of the day for the Colts net minder, who would give way to Kai Edmonds.

The third period wouldn’t start great for Barrie.  The Bulldogs would take their first two goal lead of the game when Kaliyev grabbed the loose puck in front and out-waited Edmonds and slipped it by him for the 6-4 lead.

There would be no quit in the Colts though as on a power play about midway through the third when Jack York snapped a shot through a screen that found it’s way in for his 6th goal of the season.  Nathan Allensen and Dalton Duhart assisted on the goal.

Late in the period Barrie would take a double minor for high sticking, giving the Bulldogs a big advantage with just over five minutes remaining.  They wouldn’t take long to strike as Nurse potted his 2nd of the game for the 7-5 lead.

Barrie will have a few days off after a very busy long weekend for the club.  The next time they’re in action is Thursday night when they welcome back former captain Justin Murray and the Saginaw Spirit for the first and only visit to the BMC this season.