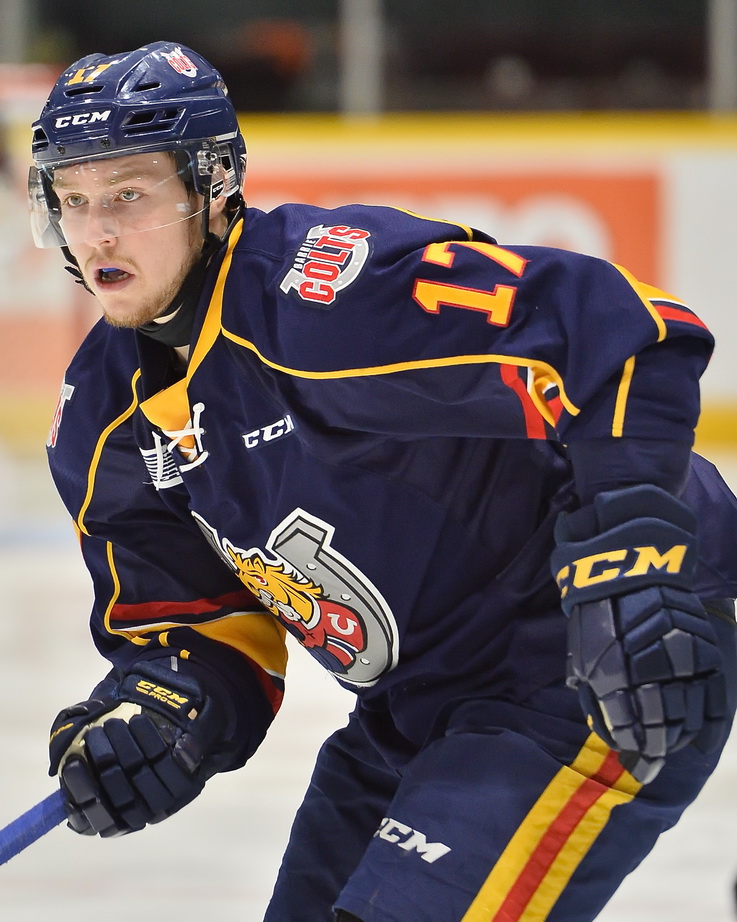 Dmitry Sokolov would put up a four point night with two goals and two assists, putting him in a tie for the league lead in goals with teammate Aaron Luchuk and Andrei Svechnikov would add to his own total putting up 2 goals and an assist in the loss.

The Barrie Colts were back at it Thursday night coming off a convincing win the night prior in Hamilton and capturing their third Central Division title in four years, the Colts were looking to continue the win streak welcoming the Owen Sound Attack into the Molson Centre for the final head to head matchup of the season.

Just over five minutes into the opening period the Attack would strike first on the powerplay. Colts rookie Kai Edmonds making his 17th start of the season would make the initial save off a point shot from Brady Lyle, but the rebound would kick right to Ethan Szypula to bury the opening marker.

The lead would be short lived as just seconds later the Colts top line would get it right back. Dmitry Sokolov would snap one from the right circle past the glove of Owen Sound starter Olivier Lafreniere for his 44th of the season. Christopher Cameron would pick up the lone assist on the tying goal.

The posts at either end would evade both teams in the late going of the first as the Colts and Attack would trade powerplay chances. Owen Sound brought the attack in the first outshooting the Colts 16-6, but the game would head to the second still tied.

Just like in the first period Owen Sound would take the lead in the early minutes. While shorthanded Nick Suzuki would sneak a pass from below the goal line under the pads of Edmonds to find Kevin Hancock alone out front.

A minute later, the Attack would keep the pressure coming and push the lead to two.

Aidan Dudas would fire a one timer from the top of the circle past Edmonds to make it 3-1.

While on the powerplay another tough break at 6:05 would see the Attack increase their lead again. Marcus Phillips’ shot would be deflected off a Barrie stick and flutter over Edmonds glove into the net.

Moments later the two Russians would connect to get Barrie back within two. Sokolov would send a pass up ice to Svechnikov. Skating one on one versus the Owen Sound defender he’d make a beautiful deke and snap a bullet past Lafreniere for his 36th of the season.

Sokolov’s hot night would continue. With Barrie back on the powerplay Svechnikov would find him wide open in the high slot firing a blast by Lafreniere to get the colts within one goal on his 2nd of the night and 46th of the year.

Before Colts fans could even sit back down from the goal Alan Lyszczarczyk would add another marker for Owen Sound to put the lead back to two and make it 5-3 heading into the third.

The Colts would get off to a great start in third. Just 22 seconds into the final frame with the puck loose behind the Attack goal Jason Willms would sneak a back hand between the post and Lafreniere’s skate for his 25th of the season.

With the fans still on their feet, the boys would keep it coming. With a shot coming from the point by Tyler Tucker , Svechnikov would redirect the shot perfectly between the legs of Lafreniere ending his night in the visiting goal. Sokolov would add another assist of Svechnikov’s second of the game that made it 5-5.

The Colts would pressure the Attack for 15 shots in the third, but couldn’t manage the go ahead goal past Mack Guzda as the game need extra time to find a winner.

In extra time, Marcus Phillips would snap one past Edmonds from the left circle to give Owen Sound the victory.

The Colts will have a day off before finishing the week as the Peterborough Petes will come to town Saturday night for a 7:30pm puck drop at the Molson Centre.