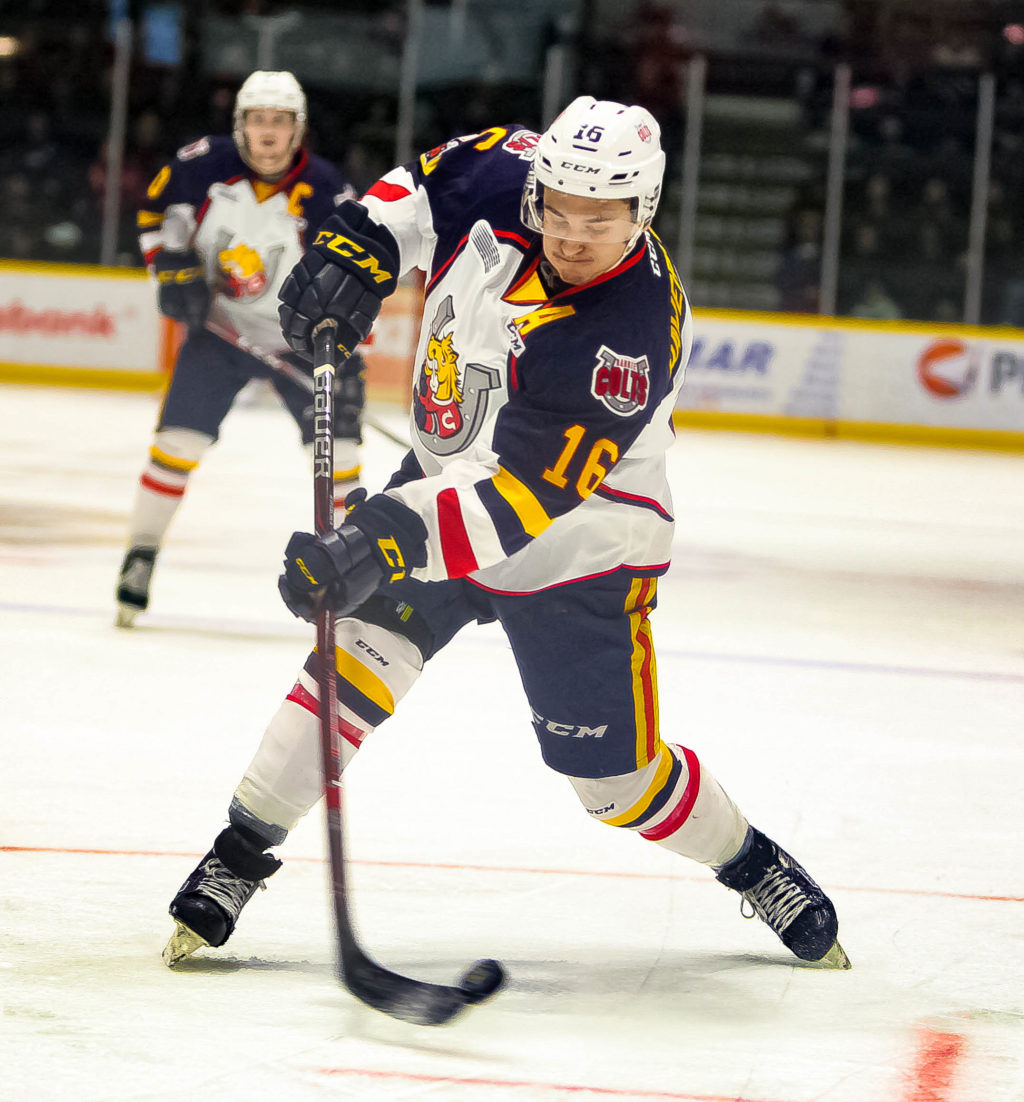 The Owen Sound Attack doubled up the Barrie Colts 4-2 on Wednesday night, extending their home winning streak to six games.

It was a frigid Wednesday evening that brought the Barrie Colts to Owen Sound for another battle in the highway 26 rivalry.

The Attack came out flying as the first few shifts were held in the Barrie forcing their starting goaltender Leo Lazarev to be sharp coming up with some big saves to keep things scoreless.

A little later on Owen Sound was rewarded on a four minute man advantage. On the powerplay it started off with a couple of Attack chances, but quickly changed to a couple of Barrie chances moments later.

First it was Jaden Peca sprung on a shorthanded breakaway for more than half the rink, he came in with speed and rung one right off the iron beating Olivier Lafreniere but not the red bar. Less than twenty seconds later it was another Colts breakway. This time it was Aidan Brown sprung loose but he was denied by the Attack goaltender as this game got off to a hot start with both goaltenders keeping the game scoreless.

The goose eggs would finally be broken just before the midway point of the opening frame. Off a point shot that Lazarev had to adjust for after it was tipped, he also was able to get the rebound that Jackson Doherty put towards the goal, but Doherty had another whack at it that finally squeaked through the Russian net minder to open the scoring.

The second period got started with the Barrie Colts getting off to a flying start. A few good chances to start the frame including Andrei Svechnikov snapping a shot off the post on a powerplay. On the same man advantage though, the Attack were able to find themselves on a breakaway. It was Brett Mackenzie going top corner on Lazarev shorthanded to give Owen Sound the 2-0 lead.

Later in the period Owen Sound was rewarded a penalty shot after a Colt defender had moved a loose stick illegally. That would setup Nick Suzuki with the opportunity but he was denied by the right pad of Lazarev to keep the score at 2-0.

Into the third the Colts would carry over a powerplay from the end of the second period. Once again, it was Owen Sound capitalizing while being down a man. This time it was Maksim Sushko on a two on one taking a shot that trickled over the goal line for the 3-0 lead.

Barrie would finally find a way to solve Lafreniere. It was a shot just at the top of the circle inside the Owen Sound zone by Aaron Luchuk who put a high shot towards the goal. It banked off the body of Svechnikov and into the back of the net to open the scoring for the Colts. Dmitry Sokolov picked up the second assist on his 22nd goal of the season.

They weren’t done there. Barrie would get a late powerplay and the two Russians would show off their chemistry. After keeping the puck in at the line, Sokolov showed his patience with the puck as he dragged it around a sprawling Owen Sound defender and finding Svechnikov on the wing who made no mistake for his second of the game to cut the lead to 3-2. T.J. Fergus would also grab an assist on the goal.

Just when it looked like Barrie was going to tie the game up, Owen Sounds top line countered with a goal of their own to seal the victory for the home team. It was Kevin Hancock poking home a rebound to extend their lead to 4-2.

Barrie is back in action Friday night as the head to London to continue their Western Conference weekend. They will then host the Windsor Spitfires Saturday night at the Barrie Molson Centre.