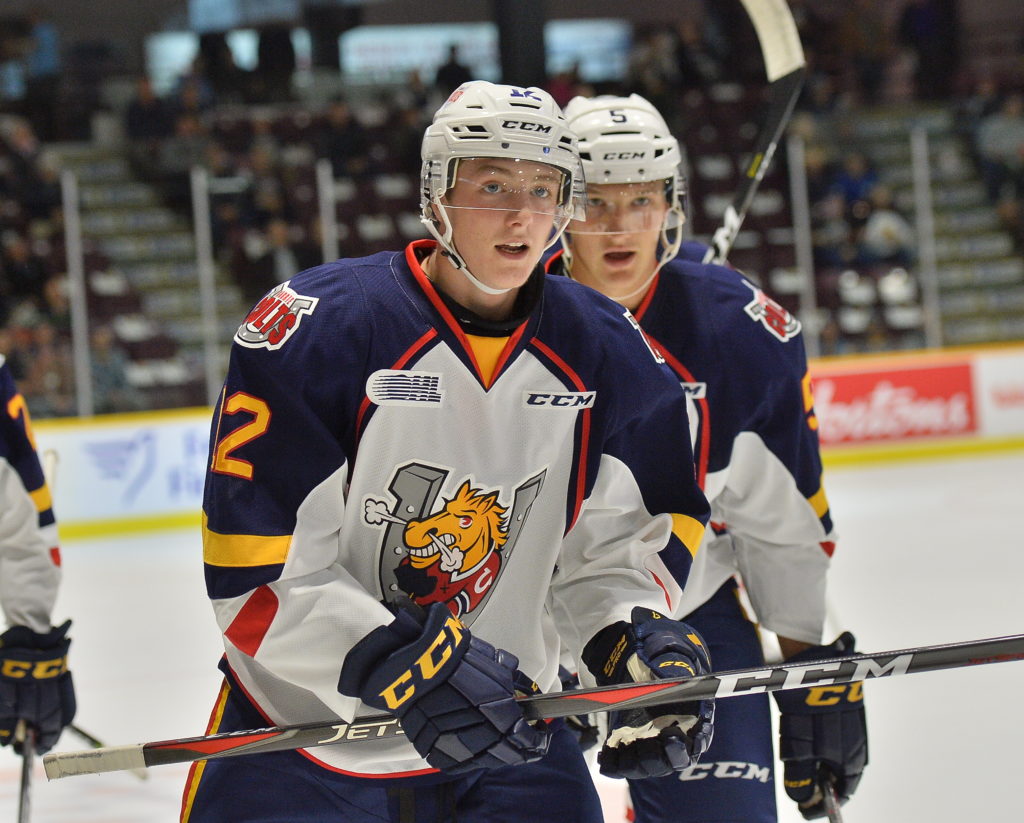 The Barrie Colts would kick off their 24th season in dominating fashion Thursday night blowing out their highway 26 rivals 9-2.

Just like last year the Colts would come out with a bang with eight different players scoring their first of the year.

Imports Matej Pekar and Maksim Zhukov set to play prominent roles on the Barrie Colts this year would both have debuts to remember. Pekar would get the Colts offense started with his 1st goal and add another in the game while Zhukov made 33 saves in the victory.

With almost all of Barrie’s players who were away at NHL camps back, the Colts would get another boost to the roster early in the day as Joey Keane would return from a strong camp with the New York Rangers.

The games opening marker would come midway through the 1st period, Daylon Groulx would snap one on net from the left circle, the puck would just trickle through Zhukov giving the Attack the 1-0 lead.

With just under a minute remaining in the opening frame the Colts would get even. Jason Willms would set up Pekar over the blue line, he’d shift around the defender and snap his 1st by Attack starter Mack Guzda.

Early into the second period Ben Hawerchuck and Aidan Brown would break in on a 2 on 1, Guzda would rob Brown on the cross ice one timer, but quickly Brown would steal the puck back sliding a pass over to Hawerchuck. He’d snipe his 1st of the season over a spread out Guzda to put the Colts in front. Willms would also assist on the play.

Just two minutes later the Colts would convert again. Coming into the zone off the rush Jaden Peca would drop a pass back to Tyler Tucker. A quick backhand by Tucker would deflect, but batting the puck out of the air was Sam Rhodes to get his 1st and give Barrie a 3-1 lead.

The Colts attack would keep coming. While on the 5 on 3 man advantage Justin Murray skating off the wall would setup TTucker for a blast from the point by Guzda to go up three.

At 16:50 and teams skating 4 on 4, Nathan Allensen would find Lucas Chiodo in the right circle to one time his 1st of the year.

With 6.5 seconds left in the middle frame, the boys would add another. While on the powerplay Pekar would finish off some pretty passing to give the Colts a commanding 5-1 lead heading into the third.

Just over a minute into the third Marcus Phillips would get one back firing a wrist shot from the point passed a screened Zhukov.

That wouldn’t stop Barrie though. Ryan Suzuki would jump in on the action picking off a pass and sniping one under the bar for his 1st making it 7-2.

In the final two minutes Barrie would add two more. Jaden Peca would grab his 1st off a tip in front and Colts 2018 1st round selection Riley Piercey would slide home his 1st OHL goal to finish off the victory.

Next up the Colts will host a showdown versus last years OHL Champion’s, the Hamilton Bulldogs Saturday night at the Barrie Molson Centre for a 7:30pm puck drop.