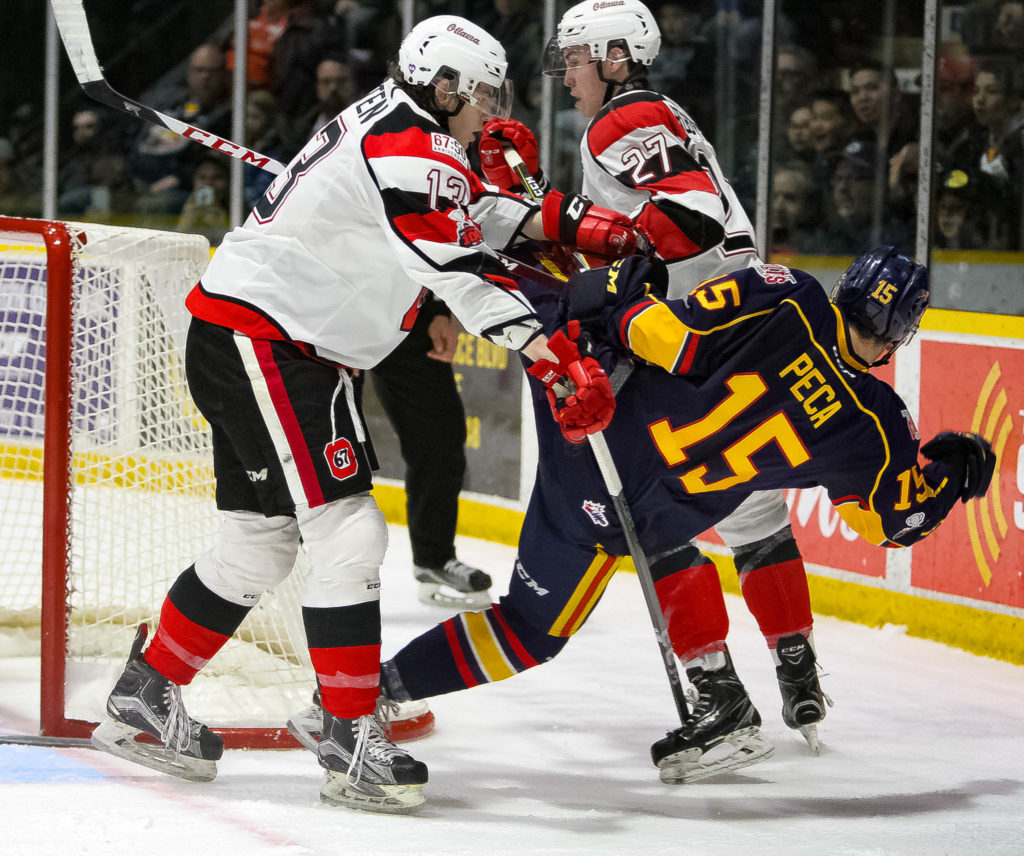 Noel Hoefenmayer would complete the comeback scoring just 34 seconds into overtime to steal a 5-4 victory for the Ottawa 67’s in Barrie Thursday night.

What looked like a sure victory and a tempting open net in the race to 50 goals, the 67’s would come back with their goalie pulled scoring two goals with under a minute to play.

Aaron Luchuk would get his 48th and 49th goals and Dmitry Sokolov would also grab his 49th to tie each other atop the league lead in goals.

Picking up one assist on the night Andrei Svechnikov would continue his point streak pushing it to 21 games.

The Barrie Colts kicking off the final week of the regular season facing off against the Ottawa 67’s. The Colts still with a chance to move up in the East would need to win their 3 remaining games and have the Bulldogs drop their final 2 games to claim top spot in the Eastern Conference standings.

Past the midway point of the first, OHL point leader Aaron Luchuk would get things started for the boys in blue burying a rebound in tight past Olivier Tremblay for his 48th of the season. Picking up the assists were Dmitry Sokolov and T.J. Fergus.

The 67’s would waste no time in the second. Travis Barron would sneak a shot short side past Lazarev just 53 seconds into the period to get the equalizer.

The Colts would quickly respond. Just over a minute later, Tremblay would play an errant puck behind his own goal leaving it for Lucas Chiodo to beat the 67’s defenders. He’d find Zach Magwood all alone in front of the goal to tap home his 24th putting the Colts back ahead by one.

Barrie would keep the pressure coming. Fergus would send a cross-ice pass finding Luchuk again. Standing at the bottom of the circle fired in his second of the game grabbing his 49th. Sokolov would also pick up his second assist making it 3-1.

For much of the third the Colts would hold the 67’s in their own end dominating much of play forcing Tremblay to come up with a number of key saves to keep his team in it.

The 67’s would eventually swings things back in the Barrie end nearing the midway point of the third. Tye Felhaber would find Barron in front of the goal to one time it by Lazarev to get within one again.

Just moments later Lazarev would come up big stopping the 67’s on a breakaway before the boys would turn up ice and push the lead back to two.

Entering the zone Sokolov would receive the pass from Andrei Svechnikov and bury it by Tremblay to make it 4-2 and earn his 49th of the season. Luchuk would also assist on the play.

Ottawa would pull Tremblay for the extra man and with just 35 seconds remaining. Tye Felhaber would grab the puck off a failed clearing attempt and wrist one past Lazarev.

Seconds later Ottawa would send it to overtime. Felhaber finding Carter Robinson at the point would blast a one timer to the back of the net making it a 4-4 game.

In overtime the 67’s would complete the comeback. Noel Hoefenmayer on the breakaway would deke to the back hand and put it past Lazarev for the victory.

The Colts will now have a home and home with the Sudbury Wolves to complete the regular season. Heading up the highway to Sudbury tomorrow night before returning to home ice Saturday night for a 7:30pm puck drop for the annual St. Patrick’s Day game.