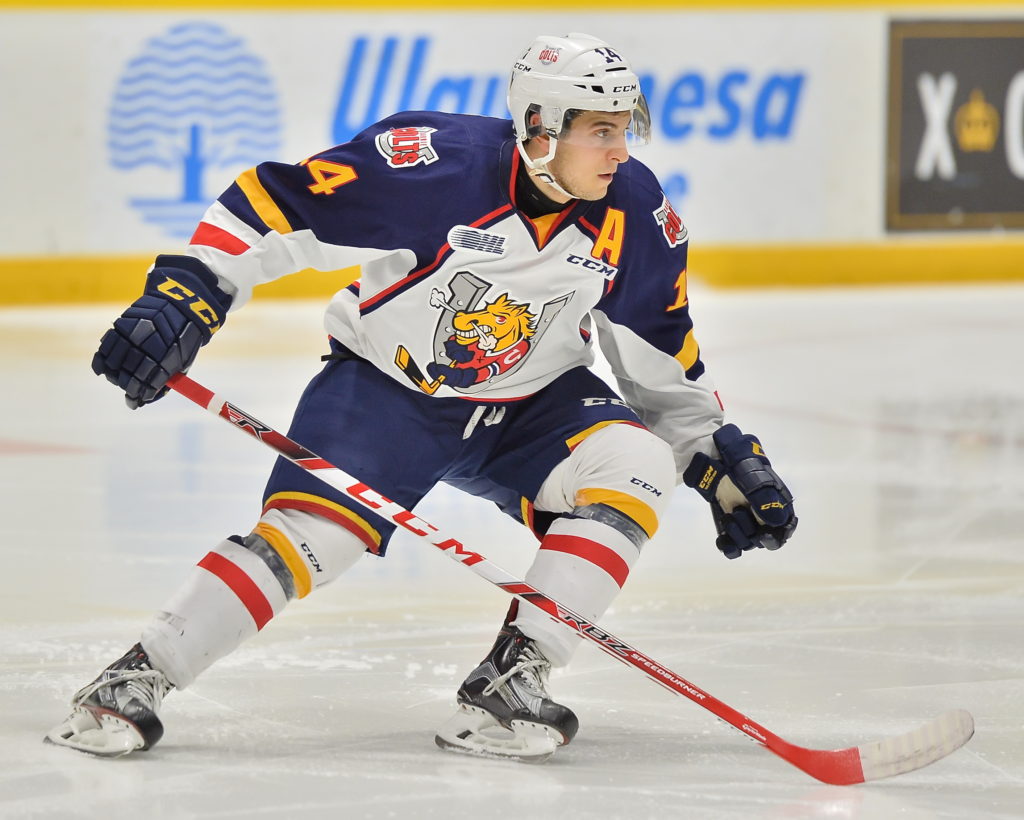 Mississauga Steelheads Captain Michael McLeod would score two goals for the home squad leading to a 4-2 win over the Colts.

With the regular season winding down, the Colts visited the Mississauga Steelheads for their final road game of the season Friday night at the Hershey Centre.

Always a hard-hitting and highly contested affair between the central division rivals. Barrie was looking to even the season series between the two teams in the sixth and final matchup.

The Colts would have no luck on this St. Patrick’s Day as for much of the first half of this game would be controlled by the strong Mississauga offense.

Nearing the midway point of the first period the Steelheads would open up the scoring. McLeod would make a diving play in front of Colts starting net minder David Ovsjannikov to fire home the loose puck and take the first lead of the game.

The opening period would see the Colt struggle to produce much offensively and wind down with the Steelheads taking the 1-0 lead into the intermission.

After Matthew Mancina had started the game he would not come out for the second and Barrie native Jacob Ingham would take over the goaltending duties after making 43 saves in win the night before for the Steelheads.

Just three minutes into the middle frame the Steelheads would push their lead to two.

After Ovsjannikov would make the initial save, the rebound would be left once again for Steelheads captain McLeod as he banged it in to the back of the net.

Just moments later the Steelheads would look for more. With the Colts getting caught on a line change, Owen Tippett would be sprung on a breakaway deking out the Colts goalie to put the home team up by three.

Midway through the second the Colts would begin to get their chances. Robert Proner would step over the blue line firing a shot just wide bouncing straight out front to Kade Landry, but would be robbed by the glove of Ingham.

The Colts would keep the pressure coming and just moments later would break through. Overager Anthony Stefano would finish off a great passing play with Lucas Chiodo to get the Colts on the board. Tyler Tucker would register an assist on the play as well.

Things would begin to open up and both teams would trade chances but once again the Steelheads would find the back of the net. Austin Osmanski would send a wrist shot on goal from the point being tipped in by Matthew Titus to restore the three-goal lead.

After forty minutes the trout would hold their 4-1 lead heading to the third.

For much of the third period neither team would generate many chances and remain relatively calm compared to the rough play that finished the second.

With just over six minutes remaining Barrie would eventually cash in and cut the lead to two.

Giordano Finoro skating into the Steelheads zone would drop one to Zach Magwood as he drifted in, he fired one over the blocker of Ingham for his 19th goal of the season.

The Colts would pull Ovsjannikov late for the extra attacker but would not be able to gain any ground, and the Steelheads would take the victory.

Make sure to join us tomorrow night for our final regular season and annual St. Patrick’s Day game versus the Kingston Frontenacs. Puck drops at 7:30pm at the Barrie Molson Centre. Be sure to wear all the green you have and your past St. Patrick’s Day Colts jerseys to join in the fun.

So come on out and support the boys and celebrate St. Patrick’s Day!