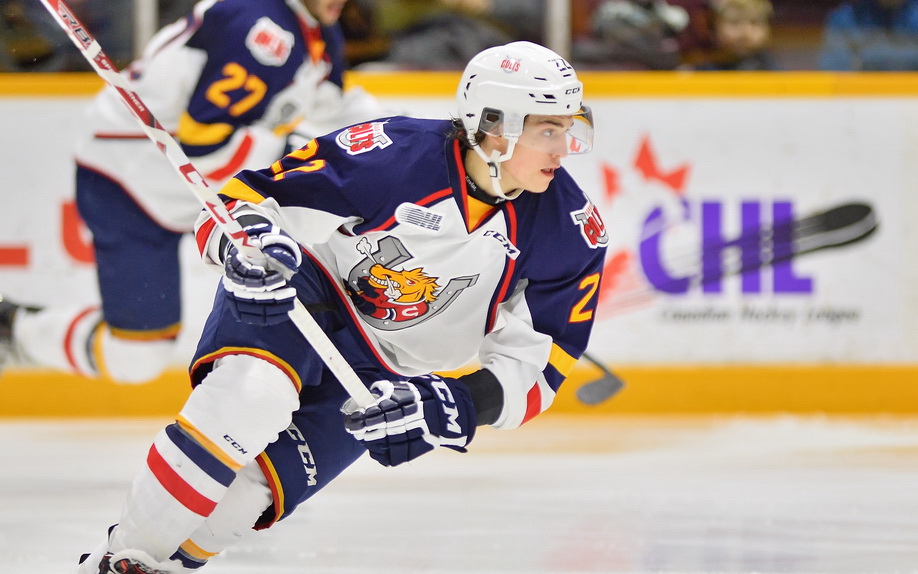 For the third game in the Eastern Conference Finals, the Colts visited the Niagara IceDogs looking to bring themselves within one in the series. After dropping both game 1 and 2 at home, the Colts had their backs against the wall heading in to Monday night’s match up.

Despite getting themselves ahead midway through the second period, the Colts couldn’t hang on to the lead as the IceDogs forced their way to a 6-3 win in Niagara, taking a stranglehold on the series with a 3-0 lead.

The IceDogs would draw first blood when they scored early in the period. Only 2:32 into the period, the IceDogs would get a break after the Colts held the pressure early. Christopher Paquette would break into the Colts zone and fire home a wrist shot to give the IceDogs the lead. Kyle Langdon would nab the lone assist on the goal.

Only four minutes later, after committing to a pinch in the offensive zone, Michael Webster took down Kyle Langdon with a huge hit. However, Webster was given a five-minute major and a game misconduct, forcing the Colts to play a defenseman down for the remainder of the game. On the ensuing 5-minute man advantage for the IceDogs, they would earn a 5-on-3 power play with 44 seconds remaining on the Webster major when Kevin Labanc was sent off for a trip. Despite the lengthy man advantage, the Colts were able to kill them off and keep it a 1-0 game.

Then, with less than two minutes to play in the first period, the Colts were given their first power play of the game when Brandon Perlini was sent off for a slashing penalty. It didn’t take long for the Colts power play to get to work, and with 2:36 remaining in the period, Julius Nattinen absolutely buried a one-timer from Labanc to tie the game at 1. Rasmus Andersson also assisted on the power play tally for the Colts.

Before the end of the period, the Colts would once again get another chance to showcase their power play, but wouldn’t be able to make anything happen.

The second period would see both teams combine for 6 goals, along with plenty of back and forth action. The IceDogs would start it off, when Harper scored only a minute into the period with an unassisted goal, his second of the playoffs.

The Colts would answer back with two of their own though, taking their first lead of the game with two goals in 30 seconds. The first came from the stick of Adrian Carbonara when he fired a shot past Nedelkovic. Zachary Magwood assisted on Carbonara’s first goal of the post-season. Then, 30 seconds later, Justin Scott was able to put home his league high 16th playoff goal. Andrew Mangiapane and Josh Carrick earned the assists on the go-ahead Colts goal.

However, just over 40 seconds later, the IceDogs would once again tie the game when Josh Ho-Sang netted his 5th of the post-season. Stephen Harper and Pavel Jenys assisted on the IceDogs third goal of the game.

The Colts wouldn’t be able to escape the second period with a tie though, as the IceDogs would score two more goals in the second period. Just before the halfway mark of the period, Jenys would score his 7th of the playoffs, with Ho-Sang and Harper getting the helpers. Then, with only 1:22 to play in the period, Wesley Harper would make on a chance, extending the Colts lead to 5-3. Harper and Ho-Sang each earned their 4th and 3rd points of the night respectively.

Despite their best efforts, the Colts wouldn’t be able to crawl back from being down 5-3. They would give up an empty netter in the final 20 seconds of the game when Harper would score his second of the game and ultimately fall 6-3.

In goal, Mackenzie Blackwood made 36 saves from 41 shots, while Alex Nedeljkovic 19 of the 22 shots he faced. Game 4 will take place on Wednesday as the Colts head back to Niagara with their season on the line.